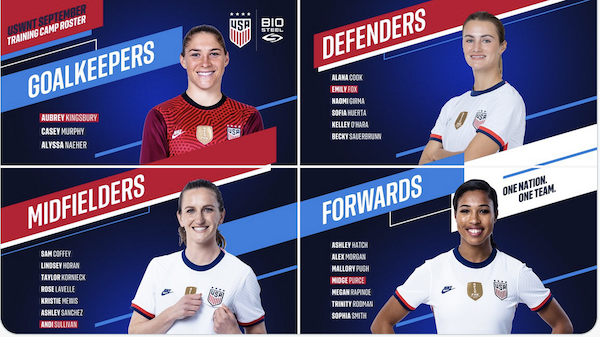 All 23 players named to the U.S. women's national team roster for September friendlies against Nigeria were part of the roster that won the 2022 Concacaf W Championship in July to qualify for the 2023 World Cup and 2024 Olympics.

“All the players on the roster performed well in Mexico at qualifying and have carried that form for their clubs, so we’ll continue the process of growing as a team with this group in what will be two challenging games against Nigeria,” said Coach Vlatko Andonovski. “Preparing for the World Cup is a long process, and I’ve been very happy with how our team understands that process, is willing to do the work and is making positive strides every camp to get us to where we want to be next summer.”

The USA beat Canada, 1-0, in the final of the Mexico-hosted Concacaf W Championship after a 3-0 semifinal win over Costa Rica. It advanced from group play with wins over Haiti (3-0), Jamaica (5-0) and Mexico (1-0).

The only player from the Concacaf W Championship roster not called in is injured Emily Sonnett. Crystal Dunn, who has been on maternity leave, will train with the team but will not be included on the roster.

Uncapped midfielder Sam Coffey replaced injured forward Ashley Hatch — now recovered and back in the squad — after the group stage of the Concacaf W Championship.

The USA has won all six previous encounters with Nigeria, outscoring the Super Falcons 19-0.