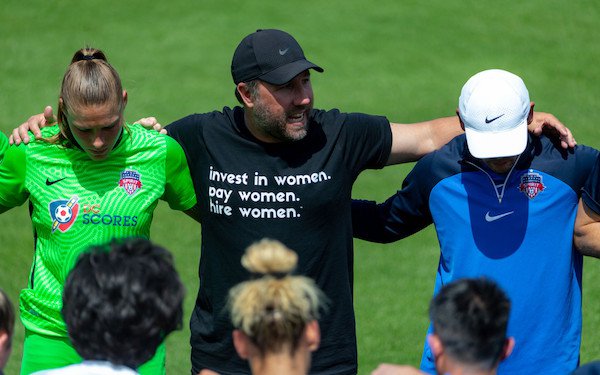 Kris Ward was fired as the head coach of the Washington Spirit on Monday.

His two seasons in charge of the NWSL team could not been more different.

In 2021, he led the Washington Spirit to its first NWSL championship. This season, its winless streak has extended almost four months.

The Spirit went unbeaten on the field with Ward in charge as acting head coach after Richie Burke was first re-assigned in August 2021 and then fired as head coach following an investigation in charges of emotional abuse made by former Spirit players.

Washington was 5-0-3 in the regular season and won all three playoff games under Ward. Its two losses were forfeits issued following a breach of the NWSL's Covid-19 protocols.

Following the season, Ward had the acting tag removed.

The Spirit's 2022 season began with a victory in its opening game of the regular season and a second-place finish in Challenge Cup.

But since the 2-1 win over OL Reign in the regular-season opener, Washington has not won a game, a span of 15 regular-season games, 17 games overall if you include the Challenge Cup knockout stage.

Washington is in 11th place in the 12-team NWSL with a 1-6-9 record, ahead of only Gotham FC on goal difference.

Ward first joined the Spirit technical staff in August 2020 as its tactical analysis and player performance development coach. His work in Washington women's pro soccer dates back to being an assistant for the Washington Freedom.

The Spirit's current problems aren't for a lack of talent. Six players were called up to the U.S. national team for the Concacaf W Championship and were in the team named on Monday to face Nigeria in September.

In late June, former Florida State head coach Mark Krikorian was named the Spirit's president of soccer operations and general manager. The Washington Post reported that Krikorian, who led the Spirit to its third NCAA Division I women's title in 2021, was not expected to succeed Ward.