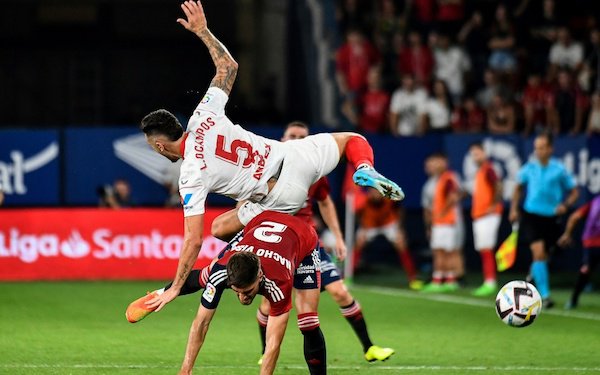 La Liga's third matchday, the last before the transfer window shuts, kicks off on Friday with a showdown of perfect teams as fourth-place Osasuna visit third-place Betis.

The pair are among four clubs who have won both their opening fixtures. They trail leaders Villarreal and second-place Real Madrid on goal difference, or goals scored.

Yet when they meet in Seville, the coaches will not be dreaming of top-four finishes, they will simply be hoping they can field their best teams next week, after the dancing stops in the summer game of transfer musical chairs.

Jagoba Arrasate, coach of Pamplona-based Osasuna, has one eye on nearby Real Sociedad and a possible Alexander Isak "cascade."

If the San Sebastian club accepts Newcastle's reported bid of 70 million euros ($69.8 million) for the Swedish striker, they will have a hole to fill, money to spend and only a few days to spend it.

"There will surely be movement and there are going to be hectic days," Arrasate told Spanish media after his squad attracted attention by winning their first two games.  "I don't expect any important player to leave. That is the first premise, but the market is open and something can always happen."

Betis kept one of its stars, Alex Moreno, and that might have had a different domino effect. After the club agreed to a fee with Nottingham Forest, the left-back decided he preferred to stay.

Betis approaches Friday's game struggling to reorganize its finances to satisfy Spanish rules. It has six unregistered players. The club is also being linked with Hector Bellerin, which spent last season on loan at Betis from Arsenal.

"Those who are more expensive are more difficult to include," said Betis coach Manuel Pellegrini, the Chilean who guided Betis to a fifth-placed finish last season. "We have to be realistic. We will see if between now and tomorrow if there is anything new."

Villarreal travels to last-place Getafe on Sunday, but is the only one of the top four that will have to recover from a mid-week game after the second leg of their Europa Conference League playoff.

Player to watch: Ansu Fati
Despite a goal by Isak in San Sebastian last week, Barcelona blew Real Sociedad away with an ominous 4-1 victory. The Barca brilliance was back as one of their chief summer signings, Robert Lewandowski, scored twice, before his clever back heel set up the fourth for Fati. The burgeoning form of the home-bred teenager might signal long-term hope for a club that has bet the future on an immediate return to the top.