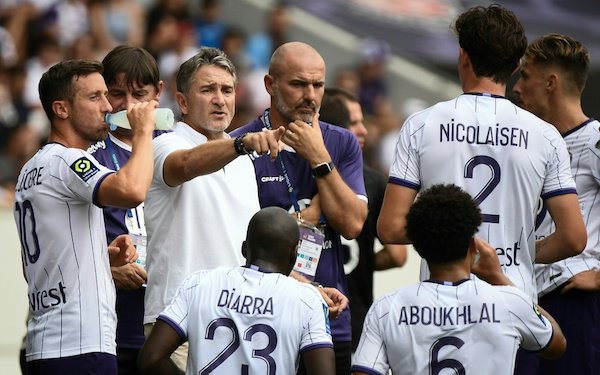 For French clubs without the means to attract Kylian Mbappe, Neymar and Lionel Messi, sometimes the key to success can be thinking outside the box when it comes to recruitment.

While Paris Saint-Germain was running away with the Ligue 1 title last season, in France's southwest Toulouse won the Ligue 2 crown to return to the top flight after a two-year absence.

Now Toulouse is hoping its approach to signing players helps it establish itself in the top flight again. It has enjoyed a solid start under coach Philippe Montanier, with draws against Nice and Lorient either side of a win at Troyes.

Their revival has come following the takeover of the club in 2020 by American investment firm RedBird Capital Partners, which also recently agreed to buy AC Milan.

It appointed former Tottenham, Saint-Etienne and Liverpool sporting director Damien Comolli as president, and he has overseen an approach to scouting players that leans heavily on the use of data, akin to that of Brentford in England.

"We work with companies who provide us with data, like Opta or Statsbomb, and then we have statisticians, our own software, algorithms, which help us with every decision that has to be taken in the running of the club," said Comolli just before the season started.

Up to 70 different leagues are combed over by the club's head of data, Julien Demeaux, and his team as they look to uncover low-cost gems who might have gone unnoticed by rivals.

One of them was Dutch midfielder Branco van den Boomen, the former Ajax youngster who was player of the year in Ligue 2 last season.

Another was English striker Rhys Healey, who was at MK Dons before moving to France and ending last season as Ligue 2's top scorer with 20 goals.

There are players from across Scandinavia, Belgium, Brazil, Japan and elsewhere, all of whom emerged from a database of thousands of names.

As Van den Boomen said of Toulouse's decision to sign him, the club "put into a computer the profile of player they were looking for, and my name came out".

Montanier –- a former goalkeeper who previously coached the likes of Real Sociedad and Nottingham Forest –- this week told The Athletic that "as a club, we are extremely data-driven". However, he has previously played down the importance of data in their success, saying "it is a project based on people."

Recruits for this season included Moroccan winger Zakaria Aboukhlal, from AZ Alkmaar, and 22-year-old striker Thijs Dallinga, who was the top scorer in the Dutch second division last season with Excelsior Rotterdam and already has two goals in three Ligue 1 games.

Toulouse is looking to continue its unbeaten start to the campaign this weekend when it visits Nantes. After that, it welcomes PSG to France's fourth-largest city next Wednesday.

The Englishman, 21, has enjoyed a stunning start in Ligue 1, scoring in each of his first three appearances for Reims since joining on loan from Arsenal. The New York-born England Under-21 forward moved to France to continue his development after spending the second half of last season at Middlesbrough in the Championship.

He made his Arsenal debut in October 2020 but has appeared just twice in the Premier League for them. As he prepares to face Lyon on Sunday, he will be hoping a successful season at Reims can help him break into the Arsenal team regularly next year.

Key stats:
5 – PSG has scored at least five goals in each of its last four Ligue 1 games. The last team to achieve such a feat in France's top flight was Reims in 1952, according to Opta.
7 – Lille’s 7-1 hammering by PSG last weekend saw Les Dogues concede seven at home for the first time ever.
11 – The number of red cards shown in Ligue 1 last weekend.