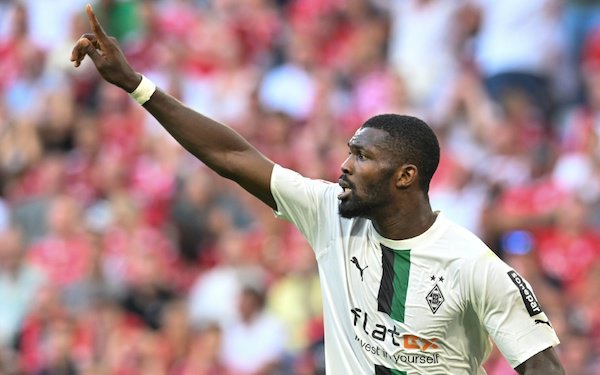 Borussia Moenchengladbach maintained its strong recent record against Bayern Munich as a record-breaking performance from keeper Yann Sommer helped secure a 1-1 away draw on Saturday.

After the game, Bayern coach Julian Nagelsmann quipped to Sommer: "You know, you could take a week off sometime" on Sky Germany's post-match interview panel.

Sommer's 19 saves in one game is the most in the Bundesliga since record-keeping started in 1993-94, easily eclipsing the previous record of 14.

Nagelsmann expressed his "annoyance" with the refereeing of Daniel Schlager, saying "he called every 50-50 situation for Gladbach." Nagelsmann picked up a yellow card late in the match for asking an assistant referee if his headset was working.

"Normally you are disappointed when you get a late equalizer. It's different today."

Bayern began in dominant fashion, pinning Gladbach in its own penalty area.

Former Liverpool striker Sadio Mane had the ball in the net twice in two minutes in the first half, but both efforts were pulled back for offside.

With Bayern launching wave after wave of relentless pressure, a goal seemed a mere formality, but it was the visitors who took the lead when French striker Marcus Thuram took advantage of an error from countryman Dayot Upamecano to put Gladbach up 1-0 in the shadows of halftime.

Bayern continued to dominate and almost equalized in the 61st minute through Mane, but Sommer somehow stopped the Senegalese twice in quick succession from close range, before pulling off a one-on-one stop against Leroy Sane.

As the game wore on, frustration began to creep into the Bayern game, with Joshua Kimmich, Marcel Sabitzer, Sane and Nagelsmann all picking up avoidable second-half yellow cards.

Jamal Musiala, brought on by Nagelsmann with 67 minutes gone, set up the equalizer in the 82nd minute, sliding a pass through for Sane to curl the ball past Sommer into the net.

Alongside, Bayern in top spot sit Union Berlin, who won 6-1 away at Schalke earlier on Saturday.

Union, which welcomes Bayern to the German capital next weekend, won through braces from Sheraldo Becker and Sven Michel, along with strikes from Morten Thorsby and Janik Haberer.

The Berlin club, which will begin its first ever Europa League campaign in September, is unbeaten after five competitive games in 2022-23.

Berlin coach Urs Fischer did not want his team to get carried away with the "lucky" win.

"Our 3-1 halftime lead was lucky. Schalke was better, more aggressive and more agile than us," the Swiss manager told Germany's SID.

French striker Anthony Modeste thanked Dortmund coach Edin Terzic after his first-half goal gave his side a narrow 1-0 win away at Hertha Berlin.

Modeste headed in a cross from former Cologne teammate Salih Ozcan in the 32nd minute to put Dortmund 1-0 up. Modeste, who is known for his theatrical celebrations which often involve dancing and even props, ran to Terzic and embraced him after scoring his first for Dortmund.

"I've copped so much (since arriving at Dortmund), but the manager was always there for me." 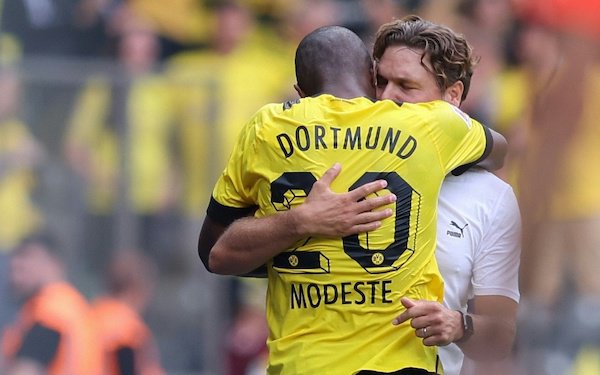 Elsewhere, RB Leipzig gained its first Bundesliga win of the season with a 2-0 home victory over Wolfsburg. Leipzig's French forward Christopher Nkunku converted a penalty after five minutes and tapped in a cross from Timo Werner late in the second half.

Bayer Leverkusen picked up their first points of the season with a 3-0 win away at Mainz.

Leverkusen, which had scored just one goal in three Bundesliga games and had already been eliminated from the German Cup, scored three first-half goals, including a brace for Dutch wing back Jeremie Frimpong.

Hoffenheim won its third game of the season with a hard-fought 1-0 home victory over Augsburg, thanks to a first-half goal from Dennis Geiger.