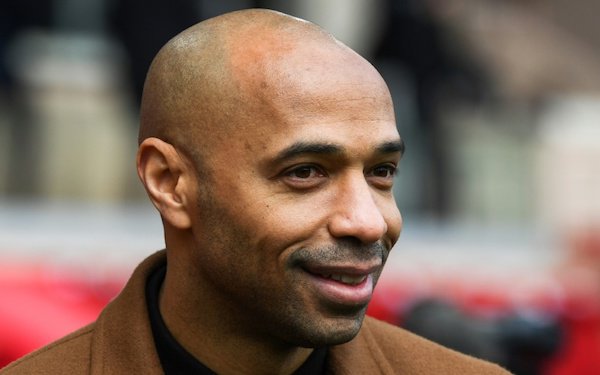 Thierry Henry was revealed on Monday as a new shareholder of ambitious Italian club Como, which is aiming for big things after rising from amateur soccer to the country's second tier.

The France icon was presented by the Serie B club at a media conference in the lakeside city, alongside CEO and former Chelsea captain Dennis Wise.

"It's a new chapter in my life," Henry told reporters. "I know the love for football here... People come to visit for the town. People in France or Spain, they talk about the lake or the beauty of the town but now it's time to talk about the club."

Como, owned by Indonesian tobacco giant Djarum, is targeting a return to Serie A for the first time since 2003 after rising from bankruptcy and fourth-tier Serie D in 2017 to Serie B, where it finished 13th last season.

Wise said that Serie A was Como's "long-term goal." The former England international added that the club was also working to rebuild the youth academy in order to "compete with AC Milan and Atalanta" in developing young talent and trying to get a new stadium built.

Earlier this month, Como signed Henry's former Arsenal teammate Cesc Fabregas, who joined after a difficult season at Ligue 1 team Monaco for which he did not play a game after September.

And on Monday the announced the signing of attacker Patrick Cutrone from Wolverhampton Wanderers.

Fabregas also became a shareholder at the club as part of his deal to join Como, whose Giuseppe Sinigaglia stadium -- owned by the city -- has the stunning backdrop of one of the world's most famous lakes.

He made his debut for Como on Monday night in a 1-0 loss to Brescia in their Lombardy derby.

"The most important thing about Cesc is his brain," said Henry. "I think we sometimes forget to develop their (player's) brain. When you're fast there, you've won, and that's why he's lasted."

Wise refused to reveal any specifics regarding Henry's role at the club, nor how much Henry had invested in order to become a shareholder. His stake in the club was "private," according to Wise.

"Thierry is a shareholder and that's all I'm prepared to say," said Wise.

Asked what his official title or responsibilities were, Wise said: "We want to understand his experiences and his ideas."

"He's welcome to come in any time and talk, we will listen. You can call him an ambassador... We'll talk in depth about football," Wise added.

Henry said that he "will come as much as I can" to Como as part of his role, depending on his other commitments as a pundit and assistant coach with the Belgium national team.

Henry won a host of trophies during a stellar career at Arsenal and Barcelona and was part of the France team alongside the likes of Zinedine Zidane that won the 1998 World Cup and Euro 2000.

He retired as a player in 2015 and then coached Monaco and Montreal.