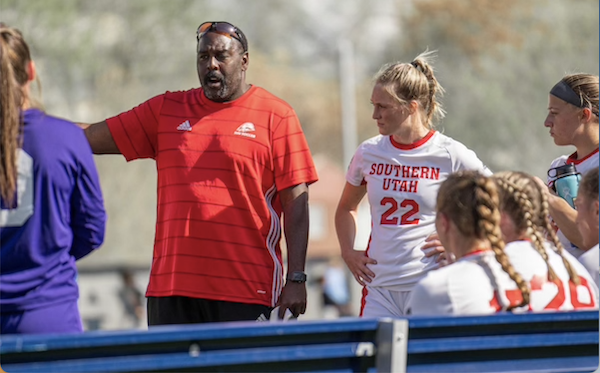 The freshman player was hesitant to speak. But she finally told her coach, “I just realized … you’re the first Black person I’ve ever had an extended conversation with.”

The van – filled with six Southern Utah University athletes, and head coach Kai Edwards – fell silent. Then he replied, “That’s why you go to college. You just showed that you’re winning at life.”

That conversation might not have taken place back in Cedar City. But the Thunderbirds were on a three-game swing through Mississippi. The trip – and the conversation it sparked – were part of Edwards’ initiative to expose his largely white players to the larger world, of soccer and life. It was also a chance to partner with historically Black colleges and universities (HBCUs).

And for Edwards – who estimates he's one of fewer than two dozen Black head coaches among NCAA Division 1 women’s soccer's 342 programs – it was the first time in his nearly 20-year career that he faced another Black head coach.

Growing up in Southern California, he’d never had a Black soccer coach himself. He was inspired by American soccer stars like Cobi Jones and Eddie Pope, but until at age 23 he heard about Clive Charles, Edwards had not realized there were other Black coaches.

Edwards had begun coaching while still in high school. (His U-12 team included future U.S. women’s national team players Whitney Engen and Christen Press.) As he rose through the colleges ranks, he saw few Black faces on the fields, or sidelines.

Two years ago, he asked Southern Utah athletic director Debbie Corum if he could schedule a trip to play HBCUs. “You can’t talk about diversity with your players, and not give it to them,” he says. “And we need to play them at their homes, to support them there.” 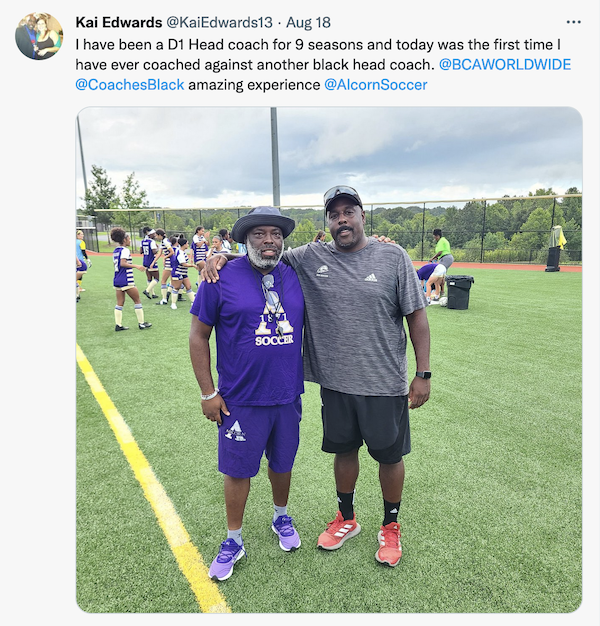 Soccer was just part of the team’s experience. Before leaving Utah, Edwards asked his players to research HBCUs. Then, from their Jackson base, they ate soul food, and toured the Mississippi Civil Rights Museum and B.B. King Museum. “There’s a big difference between reading something in a high school history book, and seeing it a few miles away,” Edwards says.

“I can’t believe people were treated like that,” one player said after learning about the civil rights movement.

“Were?” Edwards replied. “I’m still treated like that.” He described a referee who walked right past him, to talk to Southern Utah’s white assistant coach. “That happens once every five games,” he said.

Mario Felix knows that feeling. And he knows Edwards.

Growing up in Oxnard, California, his coaches were parental figures. Though none were Black, they inspired him to make it a career. When he was director of soccer operations at the University of Kansas in 2013-14, he met Edwards, who was at St. Mary’s College.

“I was in shock to see a Black head coach,” he recalls. “It was awesome.”

Connections like those are crucial in the soccer world. Recommendations are key to the hiring process. People tend to recommend coaches they know – and often come from a tight, familiar circle of people.

However, Edwards says, “It’s important to have representatives of diverse thoughts and backgrounds on a coaching staff, so your players can see themselves represented.”

When Black Lives Matter protests roiled the nation in 2020, a number of white coaches asked Edwards for advice on how to talk to their teams. He offered ideas, then added, “If you’d diversified your staff earlier, you wouldn’t have to call.” 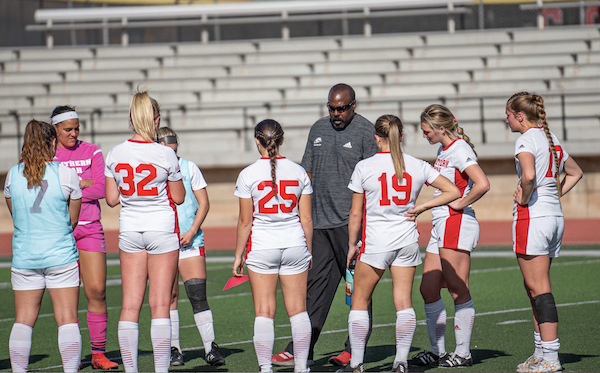 Felix believes there are about 20 Black head coaches of Division I programs. They include Keidane McAlpine at the University of Georgia, Eric Bell at Texas Christian University, Emanuel Stephens at Alabama A&M, and even rarer women, like Kia McNeill at Brown University, and Marsha Harper at American University.

With increasing numbers of Black players represented on the U.S. women’s national and youth teams, and on college squads, groups like United Soccer Coaches’ Black coaching community are pushing athletic directors to broaden the hiring pool. It is important, Edwards notes, for white allies to help too.

Meanwhile, he was uplifted by the many texts and calls he received after posting the photo of himself and Larry at the Southern Utah-Alcorn State match.

“A youth coach said she hoped one day she’d be another Black coach, coaching against me,” he says. “We thought we were just taking a picture. But it was so much more than that.”