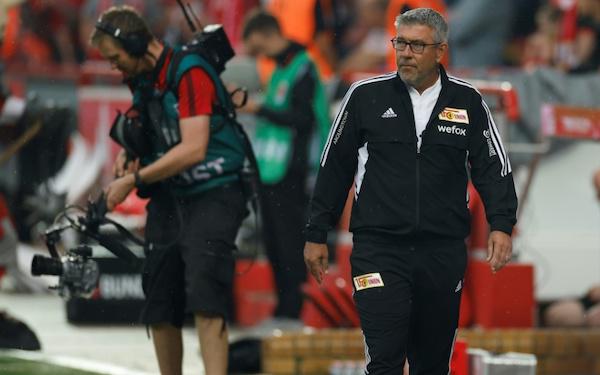 Union Berlin coach Urs Fischer is aware of the task at hand when Bayern Munich visits on Saturday, but says his team has the "courage" to "try and trip up" the reigning champions.

After four matches, Bayern and Union is separated by goal difference alone at the top of the table with three wins and a draw apiece.

A win for the home team could see it lead the top-flight table outright for the first time in its history.

"They can create a force: [Bayern] has speed and players who can decide games individually," Union coach Urs Fischer said on Thursday.

Bayern's 10 consecutive titles, not to mention their early-season form that has seen it score 26 goals in just six competitive games, have elicited plenty of fear among the rest of the league.

This fear can make the 32-time champions' job even easier. Werder Bremen defender Sebastian Proedl famously compared playing Munich to "visiting the dentist: Everyone has to go [and] it can hurt quite a bit".

While Union's resources and experience are dwarfed not only by Bayern but most of the league, its rise has been categorized by the type of fearlessness needed to successfully approach the summit of German soccer.

"I'm really looking forward to the game. It's a great task against the best team in Germany, if not Europe and the world," Fischer said, promising his side would "try and trip up Bayern".

Union is unbeaten in their last 11 matches in the Bundesliga, the longest active streak of any team. Its most recent defeat came at Bayern in March, when it went down 4-0.

Union is particularly hard to beat at home, having lost only three times at home in the Bundesliga since the start of the 2020-21 season. The performances have drawn praise from an unlikely source, with former Bayern boss Uli Hoeness saying this week that Union are "very likeable."

"[They are] very successful, I like it. They're doing a great job."

The Wednesday returns of striker Eric-Maxim Choupo-Moting and midfielder Leon Goretzka, who scored a goal, means Munich coach Julian Nagelsmann has a full complement of players to choose from for the first time this year.

Speaking after the 5-0 German Cup win over third-tier Viktoria Cologne, Nagelsmann said it was the problem every coach wants to have.

"It's not easy for me, but it's better than otherwise," the 35-year-old said. "The spirit [in the team] is very important. The competitive situation also forces one or the other to push harder."

In his third game since arriving from Cologne, striker Anthony Modeste scored his first goal in Dortmund colors as BVB won 1-0 at Hertha Berlin.

In addition to a crucial three points, what should excite Dortmund fans is the manner of the goal -- with Modeste converting a cross from Salih Ozcan, who also arrived from Cologne.

Of the 20 goals Modeste scored for Cologne last season, 10 were headers, giving Dortmund a threat it has not had since the departure of Robert Lewandowski in 2014.

"We have never had that one target player in the box in recent years -- I hope we use that weapon more often," said Dortmund coach Edin Terzic.

Key stats:
12 - Dortmund has won 12 of the past 13 matches under Terzic, a run which includes their 2020-21 German Cup victory.
6 - Union Berlin have never beaten Bayern Munich. In six meetings with the German champions, Union has managed two draws and four losses.
5 - Sadio Mane has had five goals ruled out for offside or handball in four Bundesliga matches.