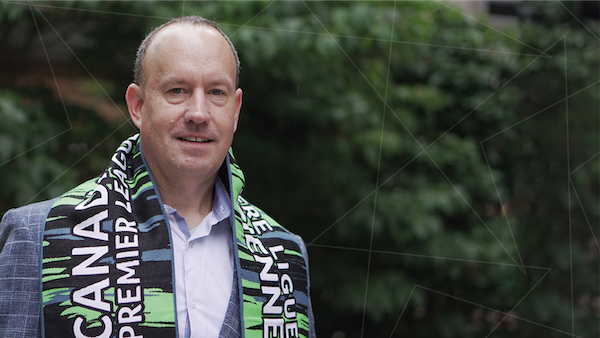 In 1986, he helped lead Duke University to the NCAA Division I championship. It was the Blue Devils’ first national title in any sport – including basketball.

Noonan went on to a career in sports. He was chief marketing officer for U.S. Soccer, and executive vice president of marketing and fan development with MLS. Most recently he served as CEO of Hearts of Oak, Ghana’s biggest soccer club.

Noonan headed his own firm, FocalSport. He also worked with the New York Mets, Gatorade, the Professional Bull Riders tour, and the World Surf League.

Now Noonan takes on a new challenge. In late August, he became commissioner of the Canadian Premier League, and CEO of Canadian Soccer Business, the commercial partner for the CPL and Canadian Soccer Association.

He assumes his dual roles at a propitious moment. The Canadian women’s team is the reigning Olympic champion. The men’s side has qualified for its first World Cup in 36 years. And in 2026, Canada joins the United States and Mexico as World Cup hosts. For the first time, the nation of 38 million is on the global soccer stage.

Noonan calls this “a golden age” for Canada’s men’s and women’s national team. He adds, “we’ve just scratched the surface.”

The men’s side “did not just luck out in World Cup qualifying. They finished first.” (Their route to the top included a 2-0 victory over the USA, and a 1-1 draw.) “They have a unified team, and can be a real challenge in Qatar.” The women’s success is clear. “The sky’s the limit,” Noonan says.

For now, he will be traveling, listening and learning. (His position including overseeing League1, the developmental division.) The key to success for the CPL is “good ownership, good venues, good operations, good sponsors and good supporters,” Noonan says.

That was part of his portfolio at MLS. He joined the league in its fifth year. There were growing pains. But, Noonan points outs, original owners paid $5 million for their franchise. The most recent expansion fee was $325 million; some existing franchises are now valued at $500 million to $600 million.

The CPL includes eight teams, from Victoria, British Columbia, to Halifax, Nova Scotia. A Vancouver side will begin play next year; two more cities will be added by 2025. Noonan’s goal is to expand the league’s footprint, both in terms of clubs and marketing, to “anywhere anyone kicks a soccer ball.” He’ll explore the formationjjj of a women’s league, too.

The CPL is just four years old – and the past two seasons were impacted by COVID. Noonan says, “I can see that (MLS) trajectory here. We’re just starting. Canada has one of the top economies in the world. The immigration policy is very welcoming. People are coming from all over the world, and they know and love soccer.”

However, he adds, roster rules favor the development of Canadian players. That won’t change. “We’re starting to develop more players like Alfonso Davies,” Noonan says, of the Bayern Munich and Canadian national team star. (In 2016, with the Vancouver Whitecaps, he became the first player born in the 2000s to appear in an MLS match.)

There will be several ways to measure how well he succeeds, Noonan says, including results on the field, attendance, viewership, sponsorship and returns on investment.

But he will also focus on the softer aspects of business and marketing, including using the CPL platform to make an impact on communities. He notes that all eight league clubs were involved in June “Prideraiser” campaigns in support of LGBTQ organizations. Pacific FC, based near Victoria, has done strong outreach to Indiginous communities, and commissioned jersey designs by an Indigenous artist.

Noonan does not have the Canadian connection with Tim Hortons that his predecessor as commissioner, David Clanachan, did. (He had been president and chief operating officer of the iconic fast-food restaurant chain.)

But while Clanachan lacked a soccer background, Noonan says the game has been “in my DNA since I went to the Robbie Tournament (in Toronto) as a kid, played short-goal with much older guys at Staples High School, and watched the Cosmos. I couldn’t not take on this challenge.”

He still plays pickup soccer when he can (though he admits, “I can’t walk for three days after”). And if he ever needs someone to talk soccer with, he can call his brother. Mike Noonan is head coach of the Clemson Tigers, the reigning NCAA Division I champions.

There is some sibling rivalry – “it took him 30 years longer than me to get that ring,” Mark Noonan said last fall – but their respect for each other is strong.

“I’m incredibly proud of Mike’s achievements, on and especially off the field,” Noonan says. “His focus has been on the technical side of the game, while mine is more on the business front. So we cheer each other on.”