The USWNT took care of business early on a humid Saturday afternoon in Kansas City, running up a 3-0 lead against Nigeria within the first 45 minutes en route to a 4-0 win as both teams prepared for next summer’s World Cup. Coach Vlatko Andonovski played a starting 11 identical to the one that beat Canada, 1-0, in the Concacaf W Championship final in July.

Sophia Smith grabbed two goals and Alex Morgan scored a penalty to seal the win early in the second half. Lindsey Horan scored the prettiest goal of the game when she juked a defender and blasted a corner-pocket laser. The USA face Nigeria again on Tuesday at Audi Field in Washington, D.C. Nigeria, one of the strongest teams in Africa, registered four shots on target but none of them seriously troubled the USA. 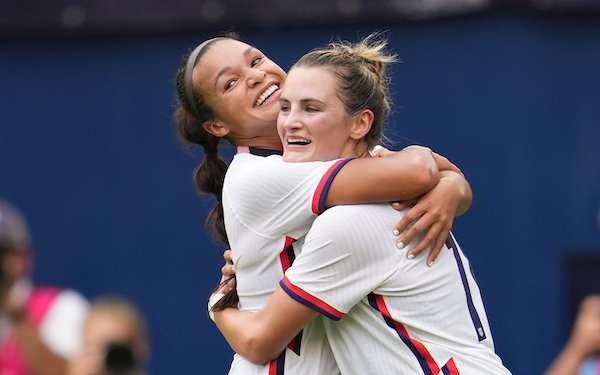 Alyssa Naeher stepped up when called upon but had little to contend with against a meek Nigerian attack. She distributed well and saved a long-range effort midway through the first half. Nigeria’s best chance came in the 76th minute when Naeher was forced to tip a shot over the bar.

Sofia Huerta won the 50/50 ball that led to the USA’s first goal and, along with her fellow defenders, was not challenged defensively. The center back partnership between Becky Sauerbrunn and Alana Cook dominated in the air and on the ground. On Nigeria’s best chance of the match, Sauerbrunn was unable to cover Hallie Mace when she was beaten down the line. Cook did not get exposed throughout the match and only misplaced a couple passes. Emily Fox was lively down the left flank but could not connect on many of her crosses. On a counterattack in the first half, she failed to find a streaking Sophia Smith who had a clear path to goal. Later, Fox found Smith on an early cross for the USA’s third goal.

The USA's midfield pressured Nigeria’s back six high up the field, forcing over a dozen turnovers throughout the match. The second goal came from the midfield forcing a mistake from Nigeria at the top of its box. Quick-footed and intelligent, Rose Lavelle flitted around Nigeria’s box and was instrumental in several U.S. attacks. She found Smith with a genius outside-of-the-foot pass in the first half but Smith’s shot was saved. Lindsey Horan and Andi Sullivan won their 50/50s and consistently fed Lavelle or the USA’s forward trio. Sullivan, the USA's deepest midfielder, mopped up broken plays and combined early and often with center backs behind her and Lavelle and Horan in front of her. Horan beat a Nigerian defender and fired a laser into the bottom corner for the USA’s second goal.

The U.S. forwards were spoiled with chances and loose balls all game against a Nigerian side that was missing six of its usual starters. Sophia Smith opened the scoring early and doubled her tally half an hour later. Mallory Pugh won a penalty early on in the second half that was expertly dispatched by Alex Morgan. As expected, Nigeria had at least seven players behind the ball on U.S. possessions, which made space tight. Morgan tended to pop in between lines while Pugh and Smith made off-ball runs, the latter being more successful than the former. Pugh misfired on a couple occasions and probably should have scored once — she did manage to snag an assist on the USA’s second goal when she poked a loose ball through to Horan. All in all, a successful afternoon for one of the world’s most potent attacks.

The influx of six new players in the space of seven minutes broke up the USA’s rhythm. There was also little to play for on a hot and humid afternoon with the result already decided. Megan Rapinoe was a creative force for the time she was on the field but fellow substitute Midge Purce was unable to execute the few chances that came her way. Kristie Mewis and Ashley Sanchez held down the midfield but did not face much scrutiny from the opposing midfield. Hallie Mace, in her first appearance for the national team since 2018, was beaten down the line too easily late on in the game and misplaced a few of her passes when she had time on the ball.

TRIVIA: The USA's Andi Sullivan and Nigeria's Toni Payne were teammates on the 2012 U.S. U-17 Women's World Cup team.

NOTABLE: The win was the USA’s 12th consecutive victory with a 50-1 goal difference over the span. The USA last conceded a goal against Uzbekistan on April 9 in its 9-1 romp.