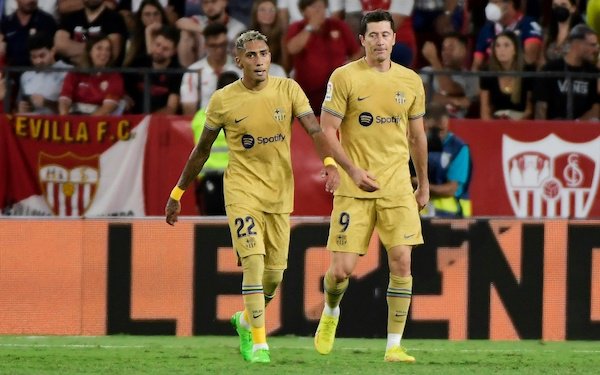 Robert Lewandowski scored again as Barcelona defeated Sevilla 3-0 in LaLiga on Saturday, while Real Madrid made it four wins from four with a 2-1 victory over Real Betis.

Barcelona rode its lucky early on at the Ramon Sanchez Pizjuan as Marc-Andre ter Stegen denied Ivan Rakitic and Youssef En-Nesyri before the visitors struck against the run of play.

Raphinha headed in the rebound after Lewandowski's dinked effort was cleared off the line, but the Poland star didn't need long to get on the scoresheet himself.

Lewandowski controlled a flighted pass from Jules Kounde on his chest and volleyed past Bono for his fifth league goal in four appearances.

Eric Garcia tapped in Barcelona's third five minutes after half-time after Raphinha's cross was nodded across goal by Kounde, who was sold by Sevilla for 50 million euros ($49.8 million) this summer.

"It was a very good match overall, we dominated and even had chances to score more," Barcelona coach Xavi told Movistar. "We're going through a good period. Winning 3-0 at Sevilla is a good sign."

Barcelona, which hosts Viktoria Plzen on Wednesday in the opening round of Champions League group games, is two points behind Madrid, but Sevilla has just one point so far.

"The situation we find ourselves in is a bit difficult," said Rakitic. "I ask forgiveness for the results, but also for confidence and patience. We have full confidence in our coach (Julen Lopetegui)."

Vinicius Junior struck for the third game running as Madrid took an early lead at the Santiago Bernabeu, but Sergio Canales soon equalized with a goal against his former club.

Rodrygo secured a 2-1 win for Carlo Ancelotti's team just past the hour with his first goal of the campaign, ending Betis' perfect start.

"He's a special forward because he can play in any position. He's very quick and very intelligent without the ball," Ancelotti said of Rodrygo, now in his fourth season with Real. "The apprenticeship is over and now he's a Real Madrid player in every way."

Next up for the European champions is a trip to Celtic in the Champions League.

"The most important game of the first part of the season is coming up on Tuesday. We're going to be taking on a team that's on a fantastic run and it's going to be very difficult," said Ancelotti.

Playing at home for the first time this season as renovation work continues on their iconic ground, Madrid had a lucky early escape when Nabil Fekir appeared to be fouled in the area.

The incident went unpunished and was not reviewed, but Fekir injured him hamstring and had to be replaced.

Betis, who began the season with wins over Elche, Mallorca and Osasuna, hit back when Borja Iglesias laid off a throw-in for Canales to drive through the legs of Thibaut Courtois.

Vinicius should have immediately restored Madrid's lead, blazing over a cross from Rodrygo. Silva then made a miraculous stop to claw out Aurelien Tchouameni's header.

Karim Benzema skewed over and then failed to convert from point-blank range moments after halftime, the Frenchman ultimately denied by a crucial touch from Silva.

The Betis keeper again got his fingers to a powerful effort from Luka Modric, but Rodrygo had the final say when he slid home Fede Valverde's pass on 65 minutes.

Atletico Madrid drew 1-1 at Real Sociedad as Nigeria striker Umar Sadiq scored on his debut for the hosts.

Alvaro Morata swept in at a corner in the fifth minute, but Sadiq headed home a second-half equalizer following his arrival from Almeria.

The 25-year-old joined Sociedad on transfer deadline day as a replacement for Sweden forward Alexander Isak, signed by Newcastle last week for a reported £58 million ($68 million).

More concerningly for Atletico, goalkeeper Jan Oblak was forced off with a leg injury late on.

"Hopefully, it will be minor and the doctors will tell us in the next few days," said Atletico coach Diego Simeone, whose team is at home against Porto next week in the Champions League.

Mallorca and Girona drew, 1-1, in the early game.