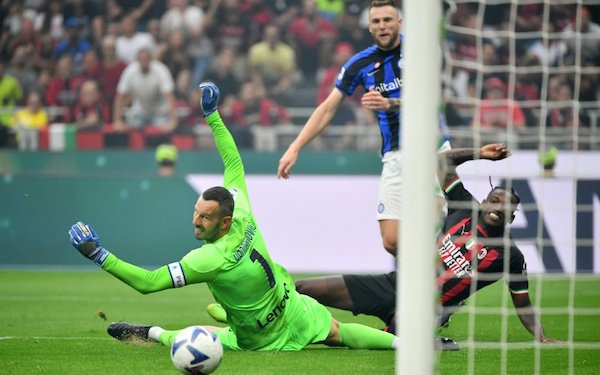 Rafael Leao fired a warning shot to the rest of Serie A on Saturday with his brace in AC Milan's 3-2 derby triumph over Inter Milan that put his team level with league leader Napoli, a 2-1 winner at Lazio thanks to rising star Khvicha Kvaratskhelia.

Leao struck twice in each half in a pulsating clash at the San Siro, the first since Milan's takeover by U.S. investment fund RedBird was completed in the week, which put the champions a point ahead of Atalanta and Roma at the summit.

Fans bounced in the stands after a thrilling match full of goalmouth incidents that was decided by Leao and Olivier Giroud, who after Marcel Brozovic's 21st-minute opener for Inter put Milan two goals to the good on the hour mark.

"If you want to improve you need talent and intelligence and Leao has both of those," said Milan coach Stefano Pioli. "Every time we put him in one-on-one situations he's a huge weapon for us."

However, Milan also had the magnificent Mike Maignan to thank for the three points after the France goalkeeper pulled off four superb stops from Lautaro Martinez, Edin Dzeko -- also a scorer -- and Hakan Calhanoglu.

Leao's second came after a mesmerizing piece of dribbling and close control, and with the transfer window now shut and Chelsea rumors died down he will be key to Milan's Champions League campaign that begins at Salzburg on Tuesday.

A second defeat in five matches leaves an Inter team without the injured Romelu Lukaku sixth and with Bayern Munich coming to town on Wednesday night.

Napoli leads Milan on goal difference after Kvaratskhelia continued his sensational start to life in Italy with the winner at Lazio, seventh after its first defeat of the campaign.

The 21-year-old Georgian, who also struck the post and missed another great chance before scoring, has captured fans' imaginations with a series of decisive displays and will be one of Napoli's key weapons when it hosts Liverpool in their Champions League opener on Wednesday.

"Going into Wednesday's match with a win is a positive, we know we're facing a brilliant team and we'll have these three days to prepare... We'll look to put in a great performance on Wednesday as well," said captain Giovanni Di Lorenzo to DAZN.

Luciano Spalletti's team is unbeaten on 11 points thanks to a hard-fought win in Rome in which it fought back from going behind after just three minutes following Mattia Zaccagni's drilled opener for the hosts.

And Kvaratskhelia netted dominant Napoli's winner and his fourth of the season in the 61st minute when he met Andre-Frank Zambo Anguissa's low pull back with a thumping effort against which Provedel could do nothing.

Napoli's win was marred by losing Hirving Lozano in the first half to a nasty looking head injury, with later reports indicating a possible face fracture.

Juventus is level on nine points with Inter after a disappointing 1-1 draw at Fiorentina.

Juve could count itself fortunate to have left Florence with a draw as after Arkadiusz Milik gave it a ninth-minute lead, Christian Kouame leveled midway through the first half but Mattia Perin pushed Luka Jovic's penalty onto the post just before the break.

"The boys played well, I saw good commitment and we kept our five-match unbeaten run going," said Juve coach Massimiliano Allegri, who is under pressure from supporters after a series of dull displays.

Juve had new signing Leandro Paredes -- who gave away the missed penalty -- made his first start while Angel Di Maria returned after recovering from a thigh injury, but they lacked spark in the third draw from five league fixtures.

A poor performance in which Milik's goal was its only shot on target is not a good omen for Juve heading into Tuesday's Champions League Group H opener at Paris Saint-Germain.