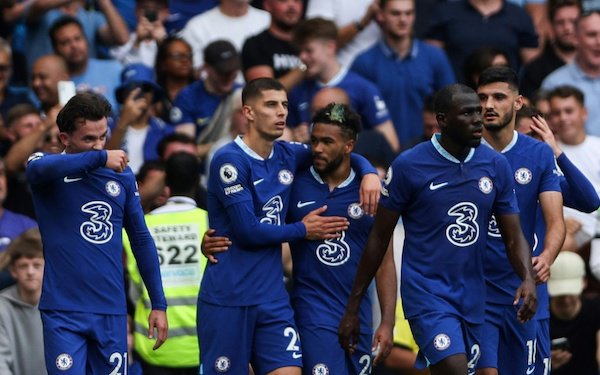 Kai Havertz scored the late winner as big-spending Chelsea fought back for a controversial 2-1 win against West Ham, while Manchester City was held to a 1-1 draw after Leon Bailey snatched a late equalizer for struggling Aston Villa on Saturday.

Having embarked on a £250 million ($280 million) spending spree in the summer transfer window, Chelsea is expected to deliver on their new owners' eye-watering investment.

The early returns had been mixed as Chelsea crashed to defeats against Leeds and Southampton.

So when Michail Antonio gave West Ham a shock 62nd-minute lead with a close-range finish, the critics were sharpening their knives at Stamford Bridge.

But Ben Chilwell equalized in the 76th minute, just three minutes after the England left-back replaced Marc Cucurella. Chilwell headed Thiago Silva's lofted ball past his marker, spun around and poked his shot through Lukasz Fabianski's legs from a tight angle.

Havertz cleverly finished off Chilwell's cross to complete Chelsea's escape in the 88th minute of a thrilling finale.

There was still more drama as Maxwel Cornet appeared to equalize in stoppage time, only for the goal to be controversially disallowed by VAR for Jarrod Bowen's foul on Edouard Mendy.

Thomas Tuchel's Blues remain unconvincing, but they are up to fifth place after their third win in six games, while West Ham boss David Moyes was livid with the officials for denying his team a point.

"The goalkeeper comes to take it, and actually fumbles it out of his hands five or six yards, so he could never recover it. Then he acted as if he had a shoulder injury. I'm amazed that VAR sent the referee for him to see it," Moyes said.

"But I thought even if he goes to the TV there's no way he's overturning this, because this is a goal. It was a ridiculously bad decision. The sad thing is this is the level of the weak refereeing at the moment."

Frustrated City. Erling Haaland has been remarkably prolific since his £51 million move from Borussia Dortmund in the close season and he struck again in the second half at Villa Park.

The Norway striker's 10th goal in his first six Premier League games gave him a share of the record with Micky Quinn, who hit the same tally for Coventry in 1992.

But Pep Guardiola's side was punished for failing to build on its lead as Bailey's blistering finish left the champions frustrated.

Merseyside draw. In the goalless Merseyside derby at Goodison Park, there was more VAR intrigue as Conor Coady thought he had put Everton ahead against Liverpool with a close-range finish from Neal Maupay's shot in the second half. But Coady's goal was correctly disallowed for offside after a VAR check.

There could easily have been goals aplenty but for a man of the match display from Everton keeper Jordan Pickford and some fine stops from his Liverpool counterpart Alisson Becker.

"Wow, what can you do? It was a great derby, super intense, with a lot of really spectacular saves," Liverpool boss Jurgen Klopp said. "We hit the post three times and Pickford made so many saves."

Everton is now without a victory in its first six games, while Liverpool's momentum was checked after winning their previous two matches.

Unbeaten Tottenham made it four wins from six games with a 2-1 victory against Fulham in north London.

Pierre-Emile Hojbjerg broke the deadlock for Tottenham in the 40th minute, sweeping home from Richarlison's pass.

Harry Kane increased Tottenham's lead in the 74th minute from Ryan Sessegnon's cross to become the third highest goal-scorer in Premier League history, with 188 goals taking him past Andy Cole.

Only Alan Shearer (260) and Wayne Rooney (208) are now above Kane in the scoring chart. Kane's goal also moved him level with Thierry Henry's tally of 43 in Premier League London derbies.

Managerless Bournemouth came back from two goals down to win 3-2 in a thriller at Nottingham Forest.