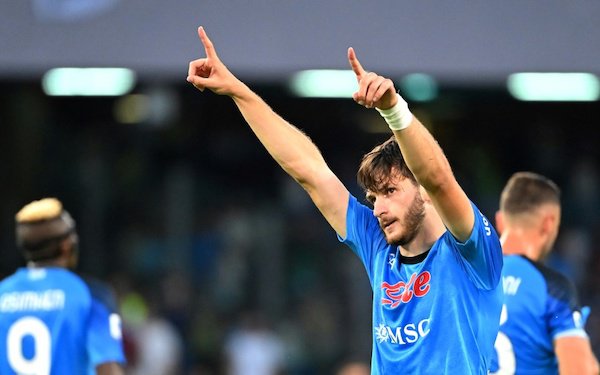 Khvicha Kvaratskhelia is the name dancing around Napoli fans' lips thanks to a stunning start to life in Italy that has swept away the summertime blues ahead of Wednesday's visit of Liverpool.

Kvaratskhelia has been nicknamed "Kvaradona" after scoring four times and setting up another goal in the first five rounds of Serie A fixtures.

The Georgian will be leading Napoli's bid for a big win in their Group A opener at the Stadio Maradona, especially as Nigeria forward Victor Osimhen is a doubt with a muscular problem.

And while comparing him to Napoli's and possibly soccer's greatest ever player might seem like blasphemy, it is testament to how well he has slotted into a team that until the first day of the Serie A season appeared to be deep in crisis.

Such has been his impact he has also been called the "new KK" after Kalidou Koulibaly, one of four big players to leave the club since the league title challenge collapsed at the tail end of last season.

Napoli coach Luciano Spalletti has been keen to dampen expectations of the 21-year-old, who arrived from Dinamo Batumi in his home country but who had already impressed over three years at Rubin Kazan before leaving following the Russian invasion of Ukraine.

"He's a really sweet kid, a good kid, one of those who at times doesn't want to be in certain situations because he's so timid," said Spalletti on Saturday after his latest match-winning display at Lazio. When you see him walk about, he's all floppy like he's on springs, but when you give him the ball he knows how to move. He's got a quality in how he strikes the ball and brings down anything you throw at him."

Bad feeling banished. Kvaratskhelia smashed home the decisive second in Napoli's 2-1 win at Lazio that put it two points behind Serie A leader Atalanta, and he could easily have had more.

His beautifully struck effort from distance cannoned off the post in the first half and he should have put Napoli ahead moments before his 61st-minute winner, shaving the bar from an almost identical chance.

His instant impact and obvious delight at playing for such a storied club have been the perfect antidote to the negative vibes that had been almost as suffocating as the heat of a Neapolitan summer.

Fans were livid after seeing some of their crown jewels sold off with few of the replacements seen as adequate for a team who were in last season's exciting Scudetto race until April.

They implored owner Aurelio De Laurentiis to sell the club, using the hashtag "A16" on social media as a reference to the motorway which connects Naples with Bari, another southern city where the film mogul owns the club.

During a summer training camp event organized to present the team, Spalletti was interrupted by a enraged supporter who shouted at him to "wake up" from his supposed torpor.

But nine goals from their first two games, Kvaratskhelia's sparkling form in both and the subsequent arrival of Italy starlet Giacomo Raspadori, Giovanni Simeone and Tanguy Ndombele swept away the ill feeling.

A fresh league title bid looks on the cards, but the question is now whether Kvaratskhelia and Spalletti's exciting side can make the sort of impact on the Champions League that Italian clubs have failed to do for too long.
td/dmc/mw