The USA, which won Saturday's friendly over Nigeria 4-0 after three first-half goals, got off to a much slower start in Tuesday's rematch. Coach Vlatko Andonovski's team went into halftime with a 1-0 lead thanks to an own goal and after Uchenna Kanu's equalizer had a half-hour to get the gamewinner. Seventy-three seconds after entering the game in the 65th minute to a rousing ovation, Megan Rapinoe delivered the cross that Rose Lavelle headed home for the winning goal in a 2-1 victory. 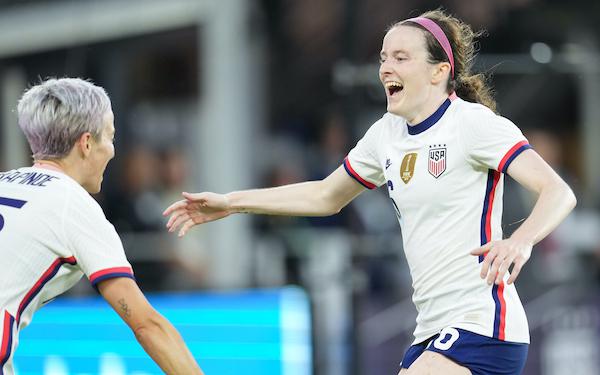 Casey Murphy's first-half action was limited to an easy save on a shot down the middle by Onyi Echegini and coming out to handle a poorly struck low cross. Kanu's well-placed shot came from the outside corner of the goal area.

Central defender Alana Cook intervened in nearly all the high balls sent through middle by the Super Falcons. Her partner, Naomi Girma, followed up her interceptions of Nigeria's passes with crisp distribution. One of Girma's passes, which left back Emily Fox relayed to Mallory Pugh, sparked the left flank movement that led to the first U.S. goal, courtesy of Oluwatosin Dimehin's own goal. Fox helped shutdown Ifeoma Onumonu when she ventured to the wing. Sofia Huerta combined well with Lavelle and Sophia Smith in the early going. In the second half, she mis-judged a cross-field pass by Glory Ogbonna that allowed Kanu to storm toward the U.S. goal and score the 1-1 equalizer. Shortly after that, Huerta sent a perfect counterattack pass to Pugh after winning the ball in U.S. penalty area. Before being subbed, Huerta lost a ball deep in Nigeria's half, leading to a counterattack and corner kick.

In her debut, Sam Coffey in a defensive midfield role covered for Rose Lavelle and Lindsey Horan, who orchestrated much of the Americans' offense. Coffey helped prevent the Super Falcons from attacking down the middle and contributed to the USA's 65%-35% possession dominance. She also set up Alex Morgan for a 1st-minute chance. The Nigerians struggled to contain Horan, who with sharper finishing could have prevented such a narrow scoreline. She shot to the keeper Chiamaka Nnadozie from eight yards in the 23rd minute and shot too weakly with a clear look from 18 yards out in the 41st minute. Lavelle, whose well-timed pass gave Pugh a close-range chance in the 5th minute, also set up a second-half chance for Sophia Smith with a headed pass. The efforts of Horan and Lavelle finally bore fruit when Horan's pass found Pugh, who dished the ball out to Rapinoe on the wing to set up the gamewinner that came from the head of 5-foot-4 Lavelle with an acrobatic finish.

Center forward Alex Morgan shot to Nnadozie from 11 yards on the earliest U.S. chance, her first of three unsuccessful shots. She passed to Horan for a long-range shot but otherwise Morgan didn't trouble the Nigerian backline. Mallory Pugh, like so many U.S. attackers on the day, made promising moves that came up short in the finishing department, starting with her mis-hit on Lavelle's 5th-minute pass and including her dribbling from the 10 yards within the U.S. half before over-hitting her shot from 17 yards. Pugh, fouled badly in the 33rd minute with no reaction form the ref, didn't put enough power on her 75th-minute shot. But Pugh helped set up the gamewinner with her delivery to Rapinoe and it was her smart low pass from the wing that Dimehin poked into her own net as Horan prepped for a sitter. Sophia Smith, whose pass offered Morgan a scoring chance in the 28th minute, failed to finish on her three opportunities.

Megan Rapinoe responded perfectly to the fans' enthusiastic reception with the game-winning assist. It was Rapinoe's 73rd assist for the USA — tied for third with Abby Wambach (73), behind Kristine Lilly (106) and Mia Hamm (147) — 73 seconds after entering the game.

TRIVIA: The Nigeria scorer Uchenna Kanu, who plays for Tigres of Liga MX Femenil, finished her college career at Southeastern University (Fla.) in 2019 with new NAIA career records for goals (157) and points (366).

NOTABLE: Kanu's goal ended the USA's nine-game shutout streak, which spanned 880 minutes and was the third longest in U.S. history.