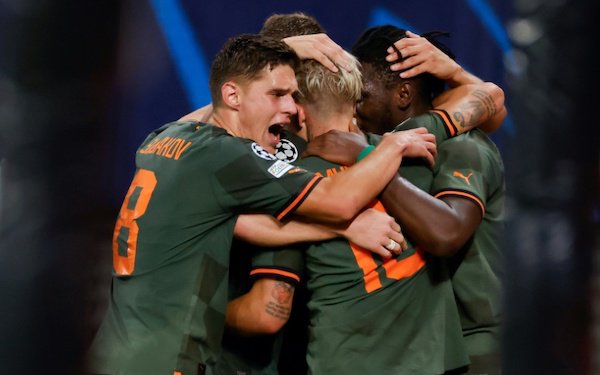 Shakhtar coach Igor Jovicevic dedicated the victory to Ukraine and its people.

"We carry responsibility for our country and for our club," the Croatian told DAZN.

Shakhtar, which has not played in its home city since 2014, did not have any competitive matches this year until Aug. 23 due to Russia's invasion of Ukraine.

It has lost multiple key players since as FIFA allowed foreign players and coaches to suspend their contracts and leave the club.

Shakhtar holds its home league games in capital Kyiv and will play its Champions League home matches in the Polish capital of Warsaw, because of a UEFA ban on playing in the war-torn nation.

"I could not have imagined in my wildest dreams such a game," captain Taras Stepanenko told uefa.com. "I have been with the club for over a decade. This is a new team, but many of these young players are from the Shakhtar academy so they have the Shakhtar spirit and this really helps us a lot."

The visitors took the lead against the run of play in the 16th minute thanks to a howler from Leipzig goalkeeper Peter Gulacsi, whose scuffed kick fell straight into the path of Marian Shved.

Leipzig continued to dominate possession and territory as the game went on, equalizing through a powerful strike from French defender Mohamed Simakan 10 minutes into the second half.

Shakhtar was undaunted, however, and hit back again through Shved, who marked his full debut with a double, just one minute later to reclaim the lead.

It put the result beyond doubt with another counter-attacking goal from winger Mykhaylo Mudryk in the 76th minute. Mudryk, rumored to be a target for Bayer Leverkusen and Arsenal before the summer transfer window closed, guided a shot beyond Gulacsi.

Burkinabe forward Lassina Traore, one of only three non-Ukrainian players in Shakhtar's 23-man matchday squad, scored his team's fourth with five minutes to play after coming on as a substitute.

Shakhtar was well supported in Leipzig, with Ukrainian flags seen around the stadium.

'Brutal' defeat for Leipzig. Considered contenders to dethrone Bayern Munich at the top of the Bundesliga this season, Leipzig has just five points after five domestic matches.

"It is difficult to find the words. The course of the game was insane," Tedesco told DAZN. "The boys wanted it. That is brutal. I'm very disappointed."

Leipzig will be desperate for a change of fortunes when it hosts Borussia Dortmund on Saturday.

Tedesco addressed the speculation, saying: "That's all part of it -- it goes very fast."