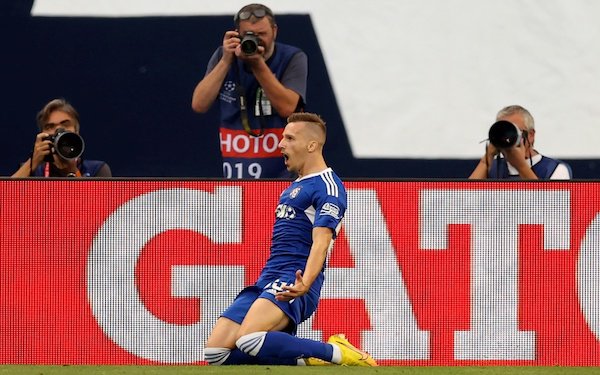 Chelsea made a miserable start to its Champions League campaign as Dinamo Zagreb ruined Pierre-Emerick Aubameyang's debut with a shock 1-0 victory on Tuesday.

Thomas Tuchel's team was expected to cruise through Group E after being drawn with Dinamo, Red Bull Salzburg and AC Milan.

But the task might not be so simple after Mislav Orsic's first-half strike punished the Blues for another sloppy display in Zagreb.

Having spent £250 million ($280 million) on new signings since the end of last season, Tuchel is under pressure to deliver silverware in return for that huge investment.

But Chelsea's spending spree has yet to pay dividends, with no eye-catching performances in the Premier League and now three successive away defeats in all competitions.

It was a debut to forget for Aubameyang, who joined Chelsea in a deadline-day deal from Barcelona just months after the acrimonious end to his time at Arsenal.

The 33-year-old had played for just eight minutes this season and only trained with Chelsea for the first time on Sunday. Aubameyang recently suffered a fractured jaw during a violent robbery at his home, forcing the Gabon striker to fly to Italy to have a custom-made protective mask fitted last weekend.

Whether it was the mask or his unfamiliarity with his new teammates, Aubameyang looked uncomfortable as he struggled to escape the Croatian champions' stifling defense.

The first ominous sign came when he didn't attack the near post as Kai Havertz whipped in a tempting low cross.

Moments later, Aubameyang ran clean through on goal, but took too long to decide whether to shoot or pass to Raheem Sterling, allowing Zagreb to avert the danger.

Chelsea monopolized possession in the early stages, but it was caught cold by a ruthless Dinamo counter in the 13th minute.

Despite spending a combined £100 million on Wesley Fofana and Kalidou Koulibaly, who both started in Chelsea's defense, Tuchel's men have had a soft center so far this season and Orsic exploited that weakness.

When Bruno Petkovic headed Robert Ljubicic's pass into Orsic's path, Fofana was left trailing in the Croatian's wake as he raced half the length of the pitch to flick a composed finish past Kepa Arrizabalaga.

Tuchel had dropped Edouard Mendy after his shaky start to the season, with Kepa replacing the Senegal keeper, who is also dealing with a patella tendon injury.

"Kepa deserves for a long time to play, it's a good moment for Edou to take a breath. He was a bit unlucky in the last games, not even bad but unlucky," Tuchel said.

Kepa could do nothing about Orsic's opener, but the Spaniard stopped Chelsea falling further behind when he palmed away Arijan Ademi's stinging strike.

Tuchel sent on Hakim Ziyech for Cesar Azpilicueta at halftime as he switched to a back four in a bid to solve the conundrum.

The change gave Chelsea some impetus and Aubameyang tapped in Chilwell's pass immediately after the interval, only for the goal to be disallowed as the defender had strayed offside to reach Mateo Kovacic's pass.

Dinamo were unfazed by that escape and almost doubled their lead when Stefan Ristovski's 25-yard rocket was tipped onto the bar by Kepa's brilliant save.

Aubameyang's underwhelming debut lasted an hour before he was replaced by Armando Broja.

Chelsea grew increasingly desperate as the match wore and its luck was out in the closing stages.

James hit the post with a ferocious drive before Mason Mount's close-range effort was repelled by Dominik Livakovic.