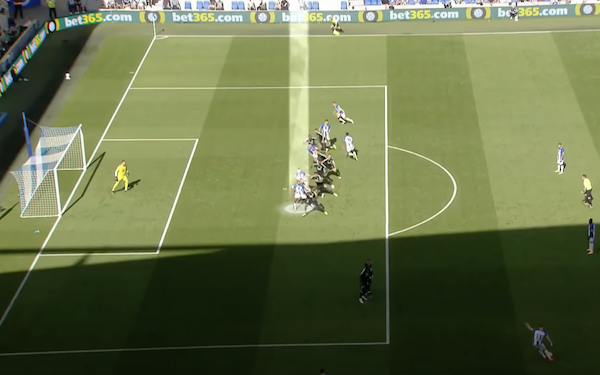 Such a brilliant goal by Alexis Mac Allister! And it was disallowed by VAR! What a systemic failure! Can the officials in the next game do better?

The call in question was wholly justified.

NBC posted the video and the discussion thereafter:

Off a Brighton & Hove Albion free kick, Enock Mwepu is in an offside position (pedantic point here: “being in an offside position” and “offside” are not the same thing) and attempts a wild bicycle kick. James Justin, part of a Leicester defense that had an atrocious game, clearly flinches as he attempts to clear the ball. It falls to Mac Allister, whose strike is indeed a screamer.

But nowhere in the "Laws of the Games" does it say, “... but don’t call it if someone makes a fantastic play immediately afterward.”

If the AR had raised his flag and the whistle had blown, the TV crew might have taken a look at the replay and shrugged.

If Mac Allister’s shot had been deflected, then even if Brighton had gone on to put the ball in the net for a goal that would be gritty rather than pretty, the VAR review wouldn’t have caused such a vociferous complaint.

The NBC crew isn’t alone in its “awww, please let it stand!” view. But former Premier League referee Dermot Gallagher, while agreeing it’s a shame to call back such a fantastic strike, patiently explained to Sky Sports why it was the right call and why it took so long to sort it all out.

Video Review in England has been controversial, hence the hiring of Howard Webb, who oversaw a comparably better rollout in the USA. It will take some time for Webb’s influence to take root, as shown by recent controversies that have made the English officiating organization reflect.

At several levels, we’ve seen replays accorded a degree of precision that doesn’t exist — particularly on offside calls, in which VAR is presented with a bunch of lines that supposedly align with the exact millisecond in which the ball is played forward. A bit of scrutiny over the process isn’t a bad thing.

(In tennis, the robot overlords are generally less controversial — a ball either makes contact with a line or it doesn’t. But during Serena Williams’ brief but breathtaking run at the U.S. Open, fans viewing the replay of a close shot at Arthur Ashe Stadium on the stadium screen couldn’t quite see that the tiny shadow showing a call was correct, and they started to boo, only to stop when Serena sportingly waved her hand and a finger to silence them.)

But the NBC discussion adds to an unfortunate tendency that has only grown in the media in recent years:

On the Mac Allister strike, how many commentators blamed Mwepu for drifting offside and then taking a wild swing at the ball? For U.S. teams, it must be the coach, U.S. Soccer’s board and staff, or the referee.

Which leads to a fascinating development in the NWSL.

Complaints about the standard of officiating in the NWSL are nothing new — and, in fairness, I’ve made them myself. The league could use a bit of investment in Video Review. Those complaints, though, have veered into absurdity, most egregiously when commentator Kaylyn Kyle exclaimed that her 3-year-old could’ve done a better job on a subjective handball call on which the referee may not have had the best angle.

Which is why Armando Villarreal, a veteran of men’s international games and big MLS games including MLS Cup 2021, was assigned to an NWSL game Sept. 4 between Gotham FC and the North Carolina Courage.

Villarreal was assigned before Gotham was unjustly denied a goal against Angel City FC — and, more puzzlingly, awarded a corner kick. PRO addressed that call and removed the officials from upcoming assignments, which should but probably won’t assuage some of the ignorant complaints that referees aren’t held accountable for their job performance. The timing of Villarreal’s assignment in this case, though, is coincidental.

Where his assignment could get interesting, though, is how he handles the U.S. national team players who are used to getting their way. One notable exception earlier this year was when Megan Rapinoe received a red card for dissent, but Rapinoe felt she was above the mandate to leave immediately and went over to shake hands and joke around with players who had not yet entered the game.

So did the media criticize Rapinoe for acting as if she was above the game?

So good luck to Armando Villarreal. Personally, you couldn’t pay me enough to officiate an NWSL game.

Coda from NBC’s EPL coverage: In the Arsenal-Manchester United game, a goal was disallowed when VAR showed a clear foul in the buildup. At halftime, did the commentators cheer the officials for getting the call right? Nope. Mustoe griped that it wasn’t clear and obvious because the referee had a good look at the play before the VAR was consulted.

Mustoe’s right in the sense that the VAR sometimes intervenes on picayune subjective calls. But this really wasn’t one of them. If the referee missed it in real time, it’s because referees are human or sometimes don’t have the vantage point they’d like. I would’ve loved to have Video Review in my season debut over the weekend, and I was just reffing a game of U-10s who aren’t quite as fast or physical as EPL players. I’ve actually asked for the video of the game to see what I can do better.

And that’s not going to make the game any better.