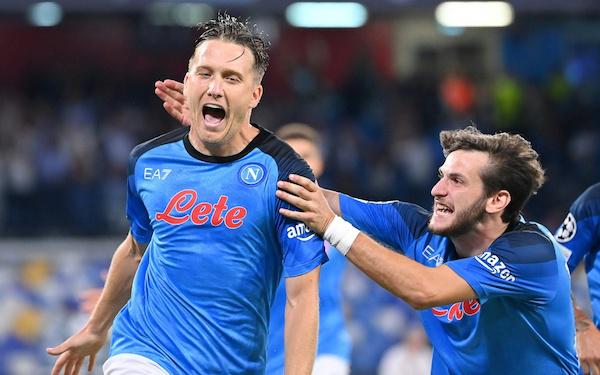 Napoli returned to the Champions League in style with Wednesday's stunning 4-1 win over Liverpool that continued the Reds' troubled start to the season.

Liverpool was swept away by a whirlwind first-half performance at the Stadio Maradona from Napoli, who were deservedly three goals to the good at the break.

Piotr Zielinski got the ball rolling from the penalty spot in the fifth minute and two more beautifully worked strikes from Andre-Frank Zambo Anguissa and Giovanni Simeone on his Champions League debut left Jurgen Klopp's team staring at a humiliating defeat.

Zielinski then added the fourth almost immediately after the restart to ensure Napoli got off to a dream start in Group A.

Luciano Spalletti's team, back in Europe's top competition after a two-season absence, is second but level with Ajax, which performed a demolition job of its own with a 4-0 win against Rangers.

The coach wanted to downplay his team's superb display, insisting that his team hadn't given anyone a lesson and that it was simply a "good performance".

"When you play teams like this it only takes one small detail to go against you and the whole shape of the game can suddenly change," he told Amazon Prime.

Napoli built on a strong start to its domestic season which has it second after five games in Serie A and will be encouraged by strong performances from new arrivals, in particular firecracker winger Khvicha Kvaratskhelia.

The young Georgian has already won over Napoli supporters with his exciting wing play and eye for goal, and although he was only on the field for less than an hour he did considerable damage.

Liverpool must now turn their attentions to trying to improve on seventh place in the Premier League.

Backed by a typically raucous crowd, Napoli came haring out of the traps and could easily have been ahead with less than a minute on the clock.

The lively Victor Osimhen broke onto a long ball from Giovanni Di Lorenzo and nudged it past the onrushing Alisson Becker, but took the ball too wide and instead of trying to lay up his arriving teammates shot off the near post.

Napoli was deservedly ahead shortly afterwards when James Milner handled Zielinski's low shot and allowed the Pole to rifle home the opener.

Napoli would have been further ahead had Osimhen taken a leaf out of Zielinski's book in the 18th minute, but instead he wasted his chance from the spot with a fancy run-up after an on-field review of Virgil van Dijk's clumsy challenge on the Nigerian by referee Carlos del Cerro Grande resulted in another penalty.

However, Liverpool was a shambles at the back, constantly caught napping on passes over the top and bewildered by Kvaratskhelia, whose 28th-minute shot was kicked off the line after Osimhen nicked the ball away from Joe Gomez.

And three minutes later, Zambo Anguissa gave the hosts a lead which more reflected the run of play.

The Cameroon international played a simple one-two with Zielinski to find himself all alone with Alisson before rolling in the second, and from there Liverpool collapsed.

A dream opening half ended with Simeone in tears after making it three just seconds after replacing injured Osimhen, tapping in a simple finish after the irrepressible Kvaratskhelia caused more havoc on the left flank.

Simeone then turned provider for Zielinski to ensure it was a memorable night for the hosts a minute after the break, a first effort denied by Alisson before a follow-up finish was dinked over the Brazilian.

Luis Diaz pulled one back two minutes later but it was all the Reds could conjure up as Napoli shut up shop and saw out a memorable win.
td/mw