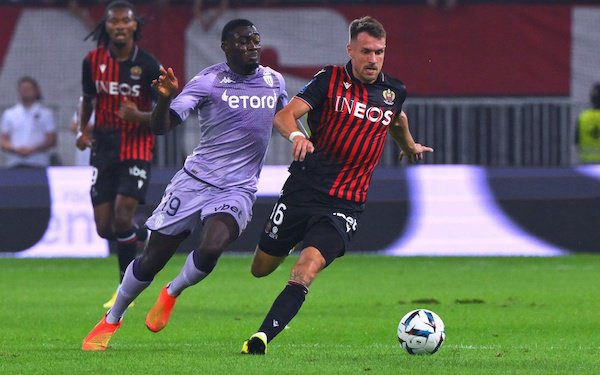 Nice is a club with mega-rich British owners and ambitions of reaching the Champions League, but it is off to a bad start to the season despite the addition of several household names from English soccer in the transfer window.

French-born Ivory Coast forward Nicolas Pepe then arrived on loan from Arsenal, before the signing of England international midfielder Ross Barkley, who was a free agent after leaving Chelsea.

Barkley, 28, was paraded before supporters prior to last weekend's 1-0 home loss to Monaco and Nice will hope he can quickly make an impact in a struggling side.

After all, Nice goes to Ajaccio this weekend sitting 16th in Ligue 1, with just one win and five points from their first six games.

It has scored just four goals -- three of them penalties -- and is already nine points adrift of the top three and a Champions League qualifying spot, having squandered a strong position in the table last season.

It was second in March before falling away and needing to win on the final night just to snatch fifth and a place in this season's Europa Conference League. It also lost the French Cup final to Nantes.

That was a blow for a club that has been transformed in recent years, especially since being taken over in 2019 by Ineos, the group chaired by Monaco-based British petrochemicals billionaire Jim Ratcliffe.

His replacement, Swiss veteran Lucien Favre, then hardly played down expectations as he returned for a second spell at the club he led to third place in 2017.

"Over the next two years, Nice must try to progress, do good things in the transfer market and regularly finish in the top three," he said. "What Ineos are doing is very interesting, they are trying to build something big."

It has the means to match its ambitions, although eyebrows have been raised in recent months with Ratcliffe trying to buy Chelsea and then being linked with a bid for Manchester United.

Eyebrows have also been raised by the involvement at Nice of Dave Brailsford, the former head of British Cycling and Team Sky who was last year named director of sport at Ineos.

"I'm not here to run a football team or say I know anything about football. I'm more the conductor of an orchestra. Lucien is in charge of the football," Brailsford told sports daily L'Equipe.

His lack of a background in the game coupled with poor results will still have some Nice fans asking questions, unless results improve quickly.

"At Nice, we want to see a team playing with a smile," he added, although few supporters are smiling just now.

One hour before the scheduled kickoff of the opening match in the third-tier European competition. several hundred hooded fans in the Cologne colors invaded a section with of Nice fans. The rivals came to blows, some armed with chairs or iron bars torn from the stadium.

A total of 32 people were injured, including two police officers and a steward, and four hospitalized, with one, a Parisian who had been among the German fans, in a "critical condition" after falling in the mayhem.