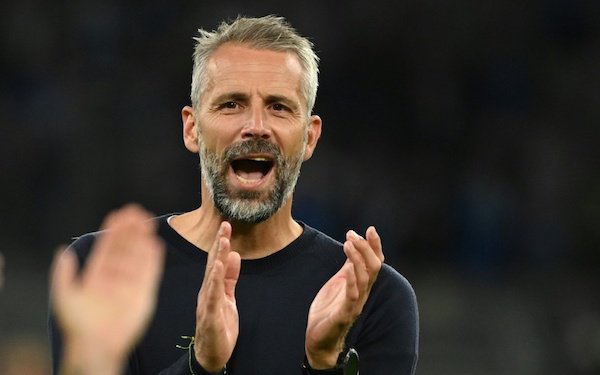 New RB Leipzig coach Marco Rose promised to "do a few things differently" ahead of his team's clash with his former employer, Borussia Dortmund, on Saturday.

Rose took charge of Leipzig on Thursday after the sacking of Domenico Tedesco on Wednesday and said he wants to "turn the mood around with a lot of energy and power -- and get results again."

Rose was sacked in May after just one season in charge despite guiding Dortmund to second place, eight points behind Bundesliga winners Bayern Munich.

At his unveiling, Rose, who was born in Leipzig and still lives there, said he had more than a few ideas on how to turn the team's stuttering season around.

"I'll do a few things differently. We have to achieve stability through activity," Rose said. "We want to be more stable at the back by putting more pressure on the ball in front."

Despite an off-season spending spree during which it landed Timo Werner and extended Christopher Nkunku's contract, Leipzig sit in 11th place with five points after five matches.

Rose is well known to his new employers, having won two Austrian league titles with sister club Red Bull Salzburg before moving to the German Bundesliga.

When the news broke, the man who replaced Rose as Dortmund coach, Edin Terzic, lavished praise on his predecessor, calling him "an outstanding coach and great person."

"I'm delighted that Marco is back and he's found a new job. I don't think either of us expected such a quick reunion."

Rose, who begun his coaching career at fourth-division Lokomotive Leipzig, said his young family, and in particular his "mega happy" teenage daughter, were thrilled that his next appointment would be in his hometown.

"It's never easy to do such a high-profile task in your hometown," he said. "I identify very strongly with my homeland, with my city. And I know I'll be measured by my results."

Best known for his prowess from dead-ball situations, Grifo has scored three times with two of his goals coming in 1-0 wins.

Grifo, 29, has played for five clubs during his Bundesliga career, but it is in the Black Forest where he does his best work, scoring 58 times and making 60 assists in 186 games with Freiburg.

Grifo's Freiburg will take on his former club Borussia Moenchengladbach on Sunday.

Freiburg finished top of the standings last weekend for the second time ever. The only other occasion was after the opening round of the 2000-01 season.