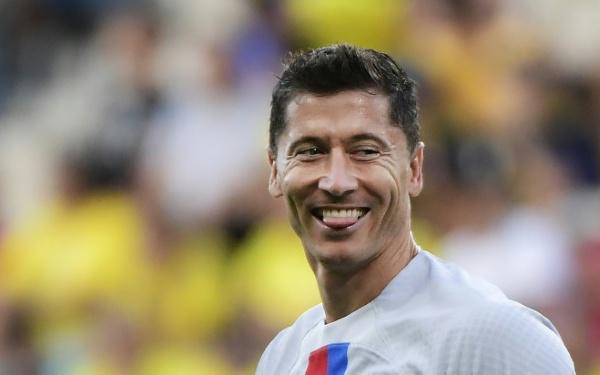 Bayern Munich will welcome Robert Lewandowski's Barcelona to the Allianz Arena on Tuesday, hoping to jolt itself out of a poor run of Bundesliga form.

Despite Wednesday's impressive 2-0 win at Inter Milan in the Champions League, Bayern has drawn three league games in a row and sit in the unfamiliar position of third place after six matches.

While Bayern has not struggled to find the back of the net this season with 31 goals in nine games, it has missed Lewandowski's penetration at crucial moments in recent weeks.

Lewandowski has had a dominant start to life in Spain, scoring six times in five La Liga matches for Barcelona to sit in his usual spot atop the goalscoring charts.

With four wins and a draw, Barcelona is unbeaten in the league and sit second behind Real Madrid.

In the Champions League, Lewandowski opened with a hat trick in Barcelona's 5-1 home win against Viktoria Plzen.

Speaking directly after their 2-2 home draw with Stuttgart on Saturday, Bayern sporting director Hasan Salihamidzic said his team knew better than most the kind of damage Lewandowski could inflict.

"We have been warned," Salihamidzic said about his former striker's form for his new club.

'He uses every opportunity.' Bayern has a strong recent Champions League record against Barcelona, with two 3-0 wins last season along with an 8-2 quarterfinal thumping on the way to winning the 2020 title.

The six-time European champions are however fully aware that this Barcelona team is stronger than some of the recent incarnations.

"Worried? I don't know [about that]," Salihamidzic said on Saturday when asked if his side were fearful ahead of Barca's visit. "We have to shift up two gears, even three against Barcelona. Barcelona have top players, play good football [and] 'Lewa' is up front, he uses every opportunity."

After his team's 2-0 win over Inter, Nagelsmann said his team was "looking forward" to taking on the man who scored 344 goals in 375 Bayern appearances.

"I am looking forward to it [the reunion with Lewandowski]. Not so much as an opponent because he's very dangerous, but as a person I will be pleased to see him."

Nagelsmann said he hoped fans would welcome Lewandowski back warmly, despite the acrimonious nature of his departure.

"I hope the fans will honor that too, regardless of how things were with his departure."

Bayern forward Thomas Mueller, who said he was "mad at ourselves for the first time this season" after the draw with Stuttgart, said he was happy for the focus to shift away from Bayern's domestic problems.

"We're really looking forward to the duel - not just because of Robert," Mueller said. "It's a meeting at the summit in the group."