Tyrone Marshall: 'It's important that you give back what you gained from the game' 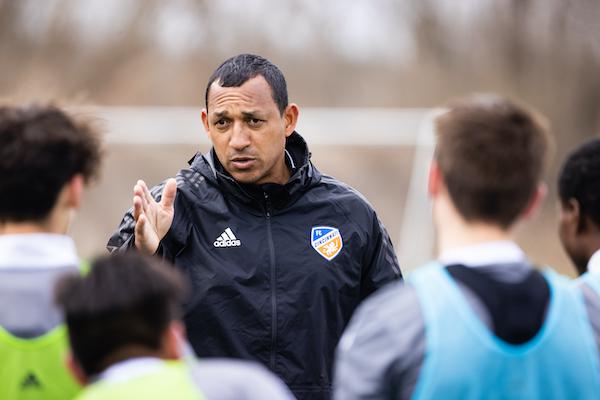 Tyrone Marshall, head coach of MLS Next Pro club FC Cincinnati 2, retired in 2012 from a playing career that spanned 15 MLS seasons and included 83 appearances for Jamaica. After serving as a Real Lake City assistant coach in 2015-2020, he moved to in FC Cincinnati and in 2021 coached FC Cincinnati's U-19s, U-23s and served as interim head coach for the final month of the season.

TYRONE MARSHALL: Back in Jamaica, where I lived in Kingston, we had a little dirt patch in front of my house across the street where we'd all meet after school and on the weekends. We'd pick up our ball and play. Two big rocks we'd put down as goal posts and we'd scrimmage every day until your mom and dad would tell us to come in for dinner.

SA: Did your family influence your soccer-playing?

TYRONE MARSHALL: When I came to Fort Lauderdale, my dad actually brought me to train in a men's league team. That way I could play with men and get that physicality. I was shown what it's like to play at a high level constantly. Those guys were training all of the time. My dad put me in with the men and it worked out to my benefit because the more I played with them the more comfortable I got. They welcomed me with open arms when they saw that I could at least not give the ball away.

SA: What are memories of playing for the Jamaican national team?

TYRONE MARSHALL: Obviously, scoring that goal against Trinidad & Tobago in Jamaica in World Cup qualifying [a 25-yard golazo for a 1-0 win in the opening game of the 2001 Hexagonal]. I think everyone from my family was there watching. It was a sold out-crowd. But it was kind of a sobering moment as well because we had lost one of our teammates. Steven Malcolm, had perished in a car accident. This was our first game since that incident. We had been doing a tribute to him and were playing with a heavy heart. To score that goal and get that victory — it was a breath of fresh air and a weight lifted off of our shoulders.

Making my debut here in the United States. My first appearance was at Lockhart Stadium. I was playing for the Miami Fusion at the time and my parents were there to watch my first game.

SA: Did you always know you wanted to get into coaching?

TYRONE MARSHALL: Yeah, I always knew. I have a passion for the game and I like to help, direct and teach while I play. I picked that up when I was a younger player. I always wanted to be the guy who could give back the knowledge — what other way to do it than coaching? I think it's important that you give back what you gained from the game. 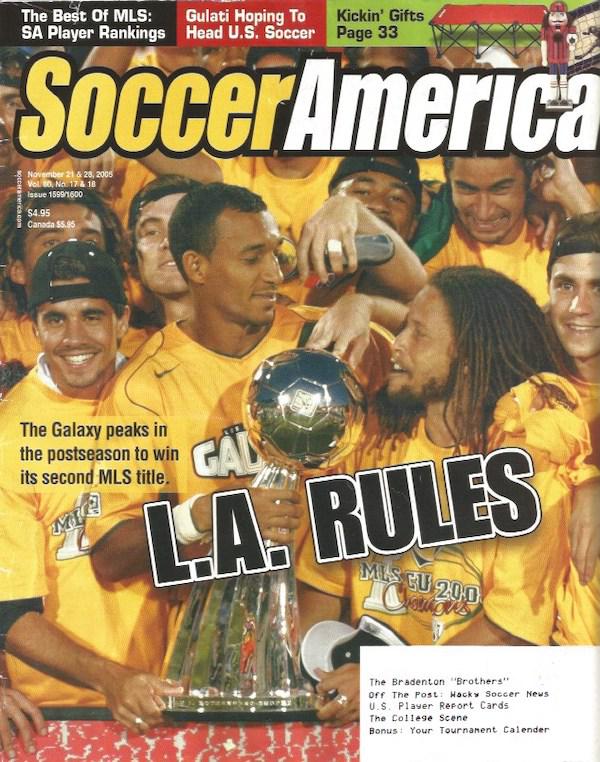 Tyrone Marshall won MLS Cups in 2005 and 2002 with the LA Galaxy, with which he spent six of his 15 seasons. He went pro after winning the 1995 NAIA national championship with Lindsey Wilson and finishing runner-up in the 1996 NCAA Division 1 College Cup with Florida International. Marshall played for Sigi Schmid, who died in 2018, with the LA Galaxy in 2002-04 and Seattle Sounders in 2009-10.

SA: Coaching role models for you?

TYRONE MARSHALL: Sigi Schmid. I played for him for a long time. He was one of those coaches who was very — he was a student of the game. He's was a scholar of the game — I call him Soccerpedia because you could ask him any soccer question and he would tell you the player, the time, the place. I always thought, "Man, if I were a coach, I would like to have that quality." When you have a guy who asks you a question and you can recall it quickly, that means this guy has knowledge. What better thing as a soccer player to have a coach who can tell you exactly what you want to hear? You're really receptive to get information from that coach.

The other coach at the international level was Rene Simoes. He brought a different perspective for me. He knew the game but he also knew what buttons to push — he would relate the game to something off of the field as far as, "How can I get the most out of these guys?"

He's telling a guy what it's like to be a reserve rather than a starter. He would say, "If you think like a starter, you'll always be a starter." Then he'd give us a story that would bring out that message.

SA: When did you start coaching and what were some difficult things you had to figure out?

TYRONE MARSHALL: That's a good question. The biggest thing for me was to separate myself as a player and a coach. I thought that everyone was at my level and pace, and instead, I had to take a step back and teach more and make sure that the information that you're giving to the player was the right information.

That was my biggest adjustment — take Tyrone Marshall the soccer player, who had just finished playing pro, to now being a teacher who needs to slow the game down and come at it from a player's perspective.

SA: Coaching your son at FC Cincinnati 2. How long did it take your players to learn that you were Morgan’s dad?

TYRONE MARSHALL: Yeah, so Morgan came from the academy and I had some other academy guys on the second team. Some of the new players who knew Morgan coming in didn't know he was my son until maybe halfway through the season. I remember Nicque Daley, a Jamaican player we brought in on loan from Charleston, didn't realize it until Morgan started speaking a little Jamaican in the locker room. Nicque was like, "Where'd you get that?" And Morgan said, "My dad.' And Nicque asked him, "Well, who's your dad?' And Morgan is like, "Coach."

Those little stories for me are touching. I try to treat everyone the same and make sure everyone's on the same playing field. 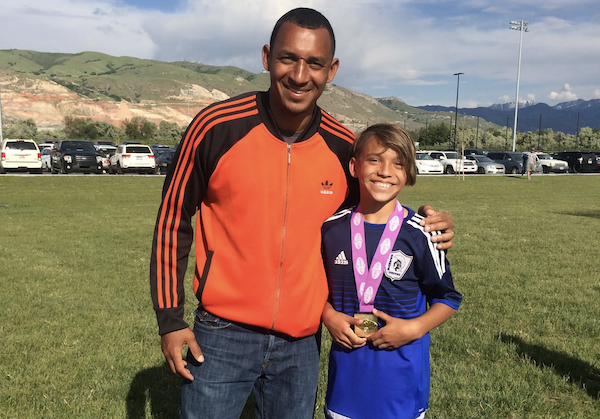 SA: How much did you coach Morgan growing up? How has his progress been?

TYRONE MARSHALL: I coached him since he was 9. When we were in Utah, I was coaching Real Salt Lake, and he was playing club. I watched from the sidelines and gave him pointers after the game. I've coached club soccer before and I never wanted a parent to coach from the sideline. But yeah, Morgan developed and joined the RSL academy and got the experience of what it's like to be at the bottom of a team. The speed of play was so fast coming from club soccer — he had to figure out how to find a spot on the field.

That learning period in Utah really propelled him to where he is now. Upon coming to Cincinnati he was prepared mentally and physically. He didn't take a day off — that attitude and work rate has put him where he is now. My hat's off to him — he's doing it all by himself with just a little encouragement from me.

SA: What was that experience like getting thrust into the spotlight as the head coach of an MLS team when you served as the interim coach of Cincinnati’s senior team last season after Jaap Staam was relieved of his duties?

TYRONE MARSHALL: It was a fantastic experience for me. I wanted to step in and see if I was able to perform and to do it just out of curiosity. Ultimately, that's where I want to be. I want to be a head coach. Stepping into those shoes and seeing if I could get the respect of the players — I thought I did that. For me, it was a job well done. I had some reservations going in but ultimately, at the end of the day, I accomplished what I set out to do: to get out there and change the environment, change the attitude. 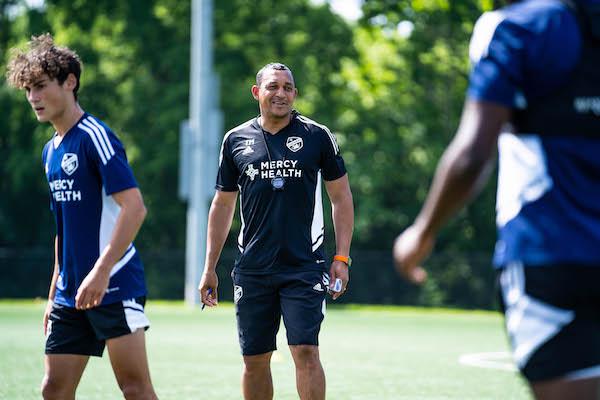 SA: Advice to coaches who are getting their start in the game?

TYRONE MARSHALL: Make sure you have a good idea of the style of play you want. Not only, possession-oriented, or not, but who you are as a coach and your principles. Your principles are the most important things as a young coach. If you develop your principles, work on them and get better at them, I think when you become a well-rounded coach your principles are what's going to set you in the right direction and make you successful.

SA: If you could change any rule in soccer, what would it be?

TYRONE MARSHALL: The offside rules — we've been struggling a lot up here in Cincinnati with that. I'd like it to be like the MLS Next Pro rules for injuries — if the trainers come on the pitch, you have to take the guy off for three minutes. So for offside, if a player is offside three times, he'd be taken out for a few minutes. Maybe then my players would be a little more cautious in terms of what they're doing.