Man City-Dortmund: Guardiola expects even more from Haaland ahead of reunion 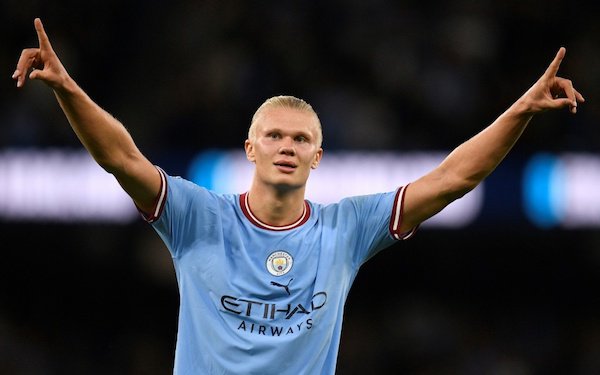 Pep Guardiola said on Tuesday that Erling Haaland will become even more prolific once he gets used to life at Manchester City as the in-form striker prepares for a reunion with Borussia Dortmund in the Champions League.

Haaland will face his former club on Wednesday for the first time since joining City in a $58 million transfer in the offseason.

That fee already looks a bargain after a blistering start featuring 12 goals from Haaland in just eight appearances for the Premier League champions.

After scoring twice in last week's rout of Sevilla, the Norwegian has netted 25 times in only 20 Champions League games and he will be looking to add to that remarkable tally when Dortmund arrives at the Etihad Stadium.

Guardiola is delighted by Haaland's hot streak, but he warned the rest of Europe that his young star is not at the peak of his powers yet.

"He's young, hungry, it's going to happen, he can improve," Guardiola told reporters.
"He's 22 and can be better. The connection with his mates, over time, will improve and he will be an even better player."

Haaland is one of several former Dortmund players in Guardiola's squad, with fellow summer signings Sergio Gomez and Manuel Akanji also in contention to feature against their old team.

Guardiola admits Dortmund will look to exploit their knowledge of Haaland, Akanji and Gomez, but he is confident they can handle the reunion pressure.

"They know these players better than I know Dortmund players, that's for sure," Guardiola said. "They can get that benefit but we'll see if it's an advantage or disadvantage, but these three know the qualities of the Dortmund players too."

City midfielder Ilkay Gundogan, another former Dortmund player, has been impressed by Haaland's attitude as much as his predatory finishing.

"The numbers speak for themselves. He's doing great on the pitch but his character, attitude and determination off the pitch is something incredible," he said.

City is hoping Haaland can prove the final piece of the jigsaw after years of near misses in the Champions League.

"We will see. It will be a very tough competition and little details can decide the outcome," Gundogan said.

Haaland scored 86 goals in just 89 appearances for Dortmund and the German club's England midfielder Jude Bellingham admitted there is no sure-fire way to neutralize him.

"I'm not really sure how you stop him to be honest. We'll have to find out tomorrow," he said. "He is a player with lot of quality and a lot of physical attributes that make him so dangerous. It's not an individual task. It is something the team has to do collectively. If we stick together and try to do the right things it can be possible."

Bellingham's excellent form since joining Dortmund from Birmingham has him linked with a move to the Premier League, but the 19-year-old is ignoring the speculation.

"The club has done loads for me, made me feel very welcome and given me the opportunities to develop further. To look past that and into the future would be disrespectful," he said.