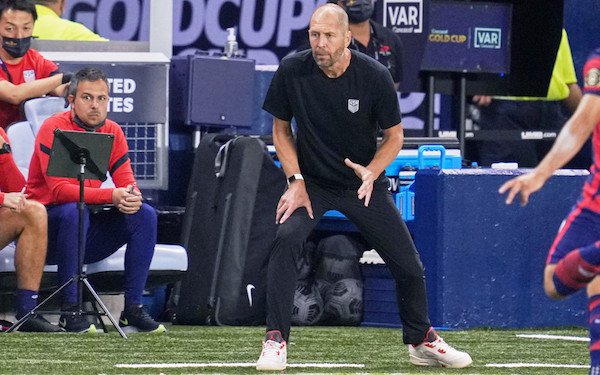 Gregg Berhalter, in a 40-minute video press conference, fielded questions on his picks and omissions for friendlies in Europe against fellow World Cup-bound Japan and Saudi Arabia while stressing: "This is not the final roster."

Still, the games do mark the final two friendlies before he does have to make a final decision on his 26 for Qatar, where the USA opens its Group B play Nov. 21 against Wales, and the healthy players left off the European tour roster will be feeling far less optimistic about their chances.

"The conversations are the hardest part," Berhalter said. "But I owe them explanations. I owe them opportunities for dialogue."

And he stressed to his players: "We're not always going to be right. We're going to make mistakes sometimes. We're choosing guys based on all our information we have and sometimes it will still be the wrong decision. That's just part of it. We're doing our best to pick a team that's united on the field that understands their roles on the field and can execute it. So it's not an easy one and there's definitely some quality guys that got left off and you know my heart goes out to them. But again it's, thankfully, not Nov. 14."

Not called is Zack Steffen, the most-capped goalkeeper in the pool who has been out of the Middlesborough lineup for its last four games with a knee injury, and 18-year-old Gaga Slonina of the Chicago Fire.

"Gaga Slonina is a guy we think highly of," Berhalter said, "and has been playing for Chicago every week, and we just went with the other three goalkeepers."

On Matt Turner, who has made only one appearance for Arsenal, Berhalter said: "I don't expect fitness will be an issue. Maybe just a little bit of rhythm and rust could come into play."

Tim Ream, who has enjoyed good reviews while captaining Fulham, drew praise from Berhalter but they haven't been enough to earn a call-back for the 34-year-old, who like John Brooks doesn't provide the speed and mobility Berhalter's high-line tactics require.

Antonee Robinson, who is recovering from an ankle injury, is, if fit, a likely World Cup choice, Berhalter said. While Sam Vines' play in Belgium earned him a call-up, Shaq Moore didn't get an invite.

"Shaq Moore was a really difficult decision," Berhalter said. "He's been playing well for Nashville. We really like his one-v-one defending. Again, we opted for other players."

Berhalter said he's continuing to keep an eye on Matt Miazga, Mark McKenzie, James Sands and Erik Palmer-Brown, who has been starting for Ligue 1 club Troyes

"So very difficult decisions for us," Berhalter said. "We only have 180 minutes of game time. Keep that in mind as well. That had something to do with the decisions. But it is what it is."

Among the midfielders not picked, Berhalter said:

“Johnny Cardoso is playing every week [for Internacional] in Brazil and we like what he’s doing. His team’s doing really well. Eryk Williamson has come on with a late surge with Portland. He’s been getting back to his good form. So, it’s going to be nice to see how he ends the season.”

In the quest for a World Cup-worthy center forward, Berhalter heaped praise on Jordan Pefok's play at Union Berlin but picked Ricardo Pepi despite his goal drought since moving to Europe.

Back for the first time since the opening World Cup qualifiers in September 2021 is 22-year-old Josh Sargent, who has scored six goals in nine games for Norwich City, for second in the EFL Championship scoring race.

Berhalter added that he only brought in three center forwards because two games wouldn't provide enough playing time for four.

"We know what Jordan Pefok can do and we didn't feel we needed to see him in this camp," he said.

On Brandon Vazquez, who's enjoying a breakout season for FC Cincinnati, Berhalter said he's been the radar since his youth national team days: "Like any players we're monitoring, they need to concentrate on doing the best they can and putting themselves in the conversation. He's in a good spot. ...

"When I have to have these conversations with guys – I’ve spoken to all of them, explained the reasoning and also let them know the same message I’m giving you guys, that it’s not decided and there’s still some time that they can try to earn their way onto the team.”

Tim Weah, who's out with an ankle injury, "may not be a lock but he has a very good chance [to make the World Cup roster]."