Ref Watch: Soccer's tolerance of referee-mobbing is a disgrace and has a far reach 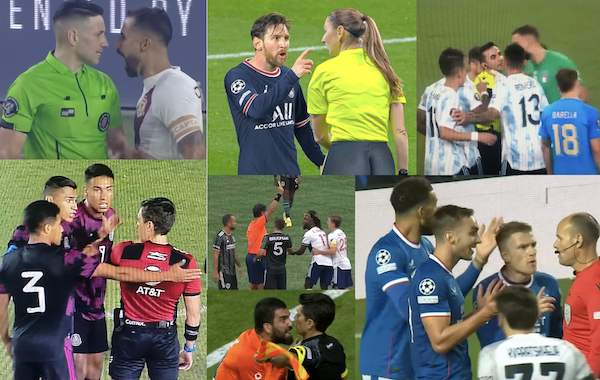 On a Saturday I reffed U-19 boys and on Sunday U-9 girls.

It’s something I enjoy most about refereeing. Getting a close-up view of soccer's different types and levels. Usually it's older kids on Saturday and younger ones on Sunday.

On the Sundays I don't expect to hear much from the players, and very rarely do. With those U-9s, the only time a player addressed me was when a 7-year-old ran straight up to me after being subbed in and asked:

“Do you know what side is right?” Caught off guard, I bent down some and said, "What's that?”

She repeated, “Do you know what side is right?”

Then it clicked that her coach told her to play right back. I pointed to the right while facing the other team’s goal.

When I ref teenage boys on Saturdays, I brace myself for hearing a lot more from the players.

I find the amount of dissent from teenage boys appalling and remarkable. There can’t be other situations in their lives where they feel free to scream angrily at an adult, can there?

But I get why they think it’s OK. They watch soccer at its highest levels, with the biggest stars, and elite referees — and see even aggressive dissent tolerated.

The sport’s leaders should be ashamed that players screaming into a referee’s face or a gang of them surrounding the ref is commonly seen soccer.

The second “cautionable” offense in the rulebook has long been "dissent by word or action," but rarely are yellow cards shown. It may be the least enforced rule in the rulebook. 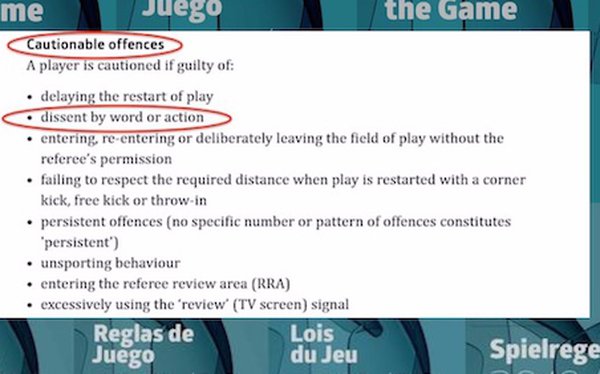 Year after year we hear of “respect” campaigns and directives from leagues and the sport’s governing bodies promising clampdowns that aren't followed up on. A sampling:

• UEFA to punish referee hounds (2012)
• UEFA warns against referee ´mobbing´ (2016)
• FIFA to clamp down on mobbing of ref (2017)
• IFAB considers instructions to referees to caution players sooner for dissent (2018)
• IFAB will continue to look at measures within the Laws of the Game to tackle mobbing of match officials and confrontations between players which should have no place in the game (2020).

Obviously, refs don’t feel they have their bosses' support to enforce the caution dissent rule. And as my colleague Beau Dure put so well, "We’re seeing players who think referees are their indentured servants."

There should be a worldwide directive from FIFA — supported by all leagues and confederations — that dissent will be cautioned as spelled out in the "Laws of the Game." There will be a  flurry of yellow cards in the next weekend's games, and many matches abandoned for lack of players, because of the second yellows shown for the players' response to the first.

But from then on, the sport will be rid this disgraceful behavior.

A further step would be a rugby-like rule in which captains can query refs in a civil manner and any other player gets immediately cautioned if they approach the referee. (see: "Rugby can show soccer the way on 'emotional' dissent" by Ian Plenderleith).

IFAB should also, as Paul Gardner has advocated for decades, create signals for referees to explain their calls ("Referees have some explaining to do"). It should be the right of players, coaches and fans to know what foul was called, and clearer communication could temper misguided dissent.

There is no doubt in my mind — in most cases — that boys who are otherwise respectful, believe that dissent is a part of the game. Why wouldn’t they, when it’s what they see their soccer role models do on TV?

On the Saturday, with the U-19s, during player check-in, I tweaked my pregame talk. I held up the rulebook and asked them if any of them had read it. I tried to use a friendly tone. The coach chuckled, after the boys’ blank stares, and said, “None of them have.”

I smiled — aiming not be schoolmasterly — and said, “OK, I know you pretty much know the rules, but there are always tricky calls, like handballs, and soccer has rules that are very hard to judge perfectly all the time. And sometimes I won't see exactly what happened.

It ended up being one of my better games. In one case, the team’s captain asked why I didn’t call a penalty kick. I told him, “My view was blocked by another player. I saw the forward fall but didn’t see what the defender did.” After the game, he thanked me for reffing. You may be surprised how rare refs get a postgame thank you.

I’m not naïve enough to believe you can build a rapport with players that survives the heat of the game. But the referees’ work at our level would be much easier if professional refs didn’t submit so cravenly to the millionaire players kids look up to.

1. Soccer in the Balance By Paul Gardner

2. Handball, or not? Even pro refs haven't a clue By Ian Plenderleith

referees, youth
13 comments about "Ref Watch: Soccer's tolerance of referee-mobbing is a disgrace and has a far reach".
Read more comments >
Next story loading

More from Soccer America Today
This is your last free article! Special Offer: Unlimited access for 50¢!