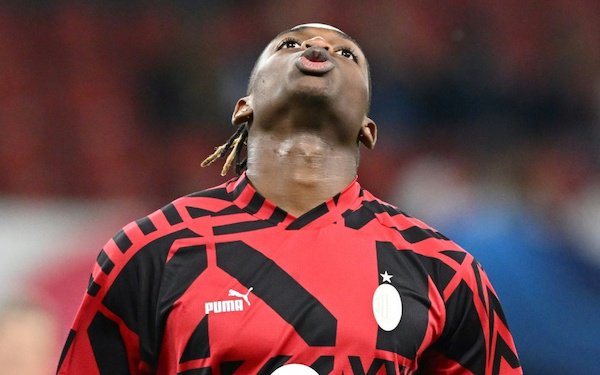 AC Milan will have to find a way past Serie A title contender Napoli without wing wizard Rafael Leao, a huge absence for the champions for Sunday night's big San Siro clash.

Leao is suspended after being sent off in last weekend's fiery encounter at Sampdoria and coach Stefano Pioli will miss the Portugal winger's lighting pace and trickery as Milan tries to claim the outright league lead in Italy.

Leao was again key on Wednesday night as Milan dealt with Dinamo Zagreb to claim its first home Champions League win in nine years and move top of Group E.

The 23-year-old was fouled for Olivier Giroud's opener from the penalty spot and then set up Alexis Saelemaekers to double Milan's lead early in the second half with a perfectly flighted cross.

Leao has already scored three times and set up five more in his eight appearances in all competitions. Without him, Milan lose a huge attacking weapon.

Giroud is back in the France fold after netting four times and both of his non-penalty goals were laid on by Leao, who was a target for Chelsea in the summer and is yet to renew his contract.

"How will we replaced him? We won't have the same characteristics as a team... we'll look for a different solution," said Pioli after the Dinamo win.

Milan's technical director Paolo Maldini said on Wednesday that Chelsea had made an informal offer for Leao in the offseason, which was rejected, but added that "it's pointless being a romantic."

"When offers of a certain type are made, no one is unsellable," said Maldini.

Milan is level on 14 points with Napoli and Atalanta, the trio separated by goal difference in a fast start for two surprise packages.

Napoli was in turmoil over the summer but is firmly in the early season title talk after thrilling Italian and continental audiences with their attacking soccer.

They are without a star of its own in Victor Osimhen, the Nigeria striker out with a thigh injury picked up during last week's hammering of Liverpool.

However, his absence didn't slow Napoli down at Rangers, as it netted three times to stay top of its Champions League group with a perfect six points.

Napoli has rattled in 20 goals in all competitions. New signings Giacomo Raspadori and Giovanni Simeone has settled in to Luciano Spalletti's revamped team, which will fancy its chances of making an early Scudetto statement.

An action-packed Sunday also features Atalanta at Roma, which is one point behind the leading pack alongside Udinese ahead of its clash with Inter Milan.

Crisis-club Juventus has the perfect chance to bounce back from their Champions League humiliation at the hands of Benfica when it travels to bottom club Monza, which on Tuesday fired Giovanni Stroppa and brought in former youth team coach Raffaele Palladino.

The Italy international started Roma's Europa League match with HJK on Thursday,  an early return for a player had been in impressive form before being sidelined by injury last month.

The 23-year-old's career has been blighted with two serious knee injuries but in the opening weeks of this campaign he had returned to the sparkling form which had so excited fans when he first arrived in 2018.

His linkup with Paulo Dybala, Lorenzo Pellegrini and Tammy Abraham will be crucial to how Roma fares against Atalanta, which has no European commitments and looks a serious proposition again.