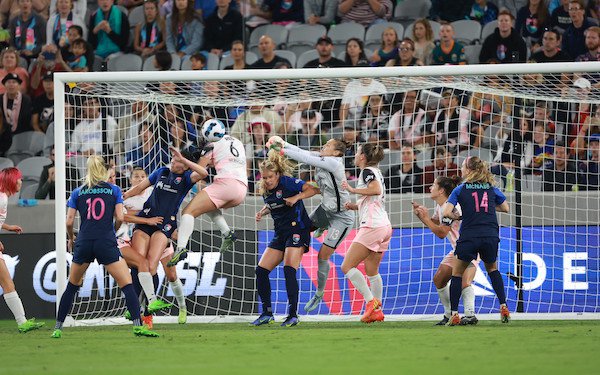 The San Diego Wave defeated Angel City FC, 1-0, in a battle of California expansion teams and moved back into first place in the NWSL standings.

The Wave's first game at Snapdragon Stadium, the new San Diego State football stadium, drew 32,000 fans. Until now, it has been playing at 6,000-seat Torero Stadium on the University of San Diego campus.

Teenage Jaedyn Shaw scored her third goal of the season in the 31st minute for the match's only goal.

With two games left in the regular season, San Diego moved ahead of Kansas City and Chicago with the win. Just four points separate the top six teams in the standings. Six teams will advance to the playoffs.


this ain’t a dream.

this is san diego. pic.twitter.com/RRNUvldtU6

• Crowd count. The crowd was the largest in NWSL history, breaking the record of 27,248 set by OL Reign for a 2021 match against the Portland Thorns that was the second game of a doubleheader following an MLS match between the Seattle Sounders and the Portland Timbers at Seattle's Lumen Field.

In 2019, the Thorns drew 25,218 fans, a sellout at Providence Park, for a match against the North Carolina Courage.

Snapdragon Stadium was built at a cost of $310 million. It opened on Sept. 3 for San Diego State's football game against Arizona that drew 34,046 fans despite a record heat wave. The stadium doesn't have a covering, and about 200 fans had to be treated for medical situations.

SDSU's men's and women's soccer teams will also use the stadium once each in 2022.
nwsl
Next story loading