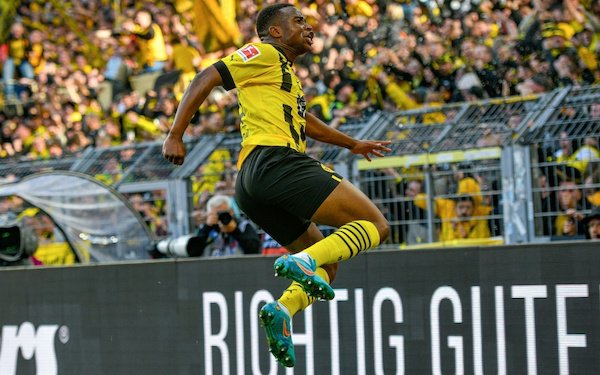 A "fantasy" goal from teenage substitute Youssoufa Moukoko fired Borussia Dortmund top of the Bundesliga on Saturday with a 1-0 derby win over Schalke, as Bayern Munich suffered its  first defeat of the season at Augsburg.

Bayern's 1-0 loss was the fourth time in a row it has dropped points in the league, after three successive draws.

After the match, Bayern coach Julian Nagelsmann blamed his side's 'laissez-faire' attitude and lack of teamwork for the loss.

"When I look at the statistics, we should have won... We could have tried simple things to play into the space behind (Augsburg's defense), but we played very laissez-faire in the final third," Nagelsmann said.

Nagelsmann said he was at a loss to explain his team's Bundesliga slide.

"The trend doesn't bode well. I'm thinking about myself, about the situation - about everything."
Augsburg boss Enrico Maassen said his team "suffered" for the win.  "I'm proud of my team. We took high risks and suffered."

In Dortmund, the home team looked set to lose another chance to capitalize on Bayern's slip-up, before a late goal from 17-year-old Moukoko saw it claim all three points.

In Augsburg, the home team roared out of the blocks, clearly motivated for a big showing against its Bavarian neighbors.

Augsburg's Florian Niederlechner had a golden opportunity to open the scoring after 11 minutes, but a crucial intervention from Bayern defender Dayot Upamecano saw his shot scuffed into the hands of Manuel Neuer.

As the half continued, Bayern began to find its rhythm, with Sadio Mane looking certain to score after 32 minutes before being denied by a last-ditch lunge from Augsburg's Max Bauer.

Augsburg, which beat Bayern 2-1 in the corresponding fixture last year, was not content to play for a draw and continually opened Bayern up on the counter.

The deadlock was eventually broken from an Augsburg free-kick, with a miscue from Brazilian defender Iago landing perfectly for Mergim Berisha, who tapped the ball home.

Nagelsmann reacted immediately, bringing off right-back Noussair Mazraoui for forward Serge Gnabry. The visitors continued to press for an equalizer as the match went on, but Augsburg held on for a deserved victory.

Dortmund's victory over their bitter derby rivals was tempered by a potentially serious ankle injury to captain Marco Reus.

Reus, who missed Germany's 2014 World Cup triumph due to an ankle injury, was stretchered off in tears in the 30th minute after a clash with Schalke defender Florian Flick.

Jude Bellingham went close to the opener after play resumed, but his glancing header was kept out by a fingertip save from visiting keeper Alexander Schwolow.

Dortmund striker Anthony Modeste was subbed out in the 64th minute for Moukoko, who immediately added speed and directness up front.

Dortmund's continued pressure on the Schalke goal finally paid off in the 79th minute, when Moukoko headed in a superb cross from Marius Wolf after good work in midfield from Gio Reyna.

Directly after the game, Moukoko promised his team would celebrate the "beautiful, incomprehensible win." The night will definitely be a long one tonight. I dreamed of that goal every day when I was young. I had the fantasy in my head."

The victory was Dortmund's fourth 1-0 win in seven games this season.

Rose, who started his RB Leipzig reign with a dominant 3-0 win at home over former club Dortmund, lost against Gladbach - the team he coached from 2019 to 2021 - by the same scoreline.

Gladbach's Jonas Hoffmann scored two first-half goals to give the home team the ascendancy, before Ramy Bensebaini scored Gladbach's third in the 53rd minute to put the game beyond doubt.