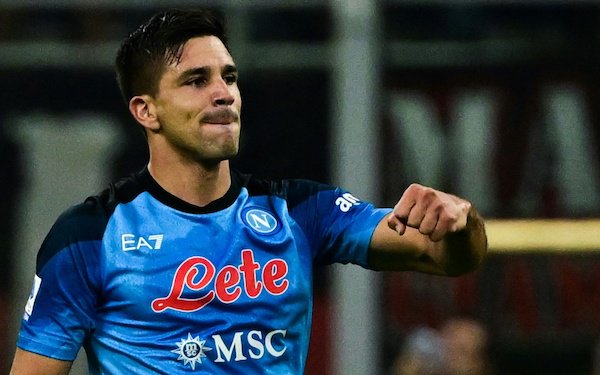 Napoli announced its bid for the Serie A title with Sunday's 2-1 win at AC Milan that maintained its league lead, while the crisis at Juventus deepened following a humiliating defeat at Monza.

A Matteo Politano penalty 10 minutes after half-time and Giovanni Simeone's header with 12 minutes remaining gave Napoli a statement win at the San Siro, one managed without injured star striker Victor Osimhen and suspended coach Luciano Spalletti not on the bench.

Napoli sit top of the pile on goal difference from Atalanta, a 1-0 winner at Roma, and a point ahead of Udinese, which beat Inter Milan 3-1 in Sunday's early match to win its fifth match in a row.

They are also three points ahead of champion Milan, which dropped down to fifth after its first defeat of the season.

"This is not just about quality, this is a determined team which is capable of sacrifice," said substitute Simeone to DAZN. "All this team wants to do is to give its all and get better day by day."

Simeone's first Serie A goal for Napoli ended a 22-match unbeaten run for Milan, who leveled in the 69th minute through Olivier Giroud and was unlucky to lose after hitting the woodwork late on through Pierre Kalulu.

However the absence of suspended star Rafael Leao and some smart saves from Alex Meret, who tipped one early Giroud effort of the bar, cost Milan at least a draw.

"I am not happy at all and neither should my players be. We only scored one goal and that isn't enough for the chances that we created," Pioli told DAZN. "I hope we learn to be more clinical in front of goal because we did everything right except for the mistakes we made in both penalty areas."

Atalanta is level with Napoli after Giorgio Scalvini's beautifully hit low strike 10 minutes before the break at the Stadio Olimpico earned them the three points.

The 18-year-old's winner was the only shot on target from Gian Piero Gasperini's team that has developed a cynical streak this season, conceding only three times in seven matches.

Roma, which lost Paulo Dybala to injury in the pre-match warm up and was wasteful in front of goal, was livid 10 minutes after the break when referee Daniele Chiffi didn't give the hosts a penalty for Caleb Okoli yanking at Nicolo Zaniolo's shorts to the point that his underwear was visible.

"I need to change what I tell my players, I have to tell them to not to stay on your feet... be a clown like many who dive like they're in a swimming pool do in this league," said Mourinho to DAZN after being sent off for his protests.

Juventus was in trouble before Sunday, and the boos from the stands after its midweek defeat to Benfica was replicated in the away end at the U-Power Stadium after a devastating 1-0 loss.

Angel Di Maria said the defeat was his fault after being sent off for elbowing Armando Izzo five minutes before the break.

But fans are placing the blame firmly with the man who won Juve five league titles for their team's dismal results and performances that have left it eighth and seven points behind the leading duo.

However, before the match, Juve CEO Maurizio Arrivabene said it would be "crazy" to sack Allegri, under contract until 2025 on a reported salary of seven million euros a year, and there has been no indication that he is about to be let go.

Monza is still in the relegation zone but move above Sampdoria and Cremonese, thumpd 4-0 by Lazio, and is a single point behind 17th-placed Verona following its 2-0 defeat at Fiorentina.