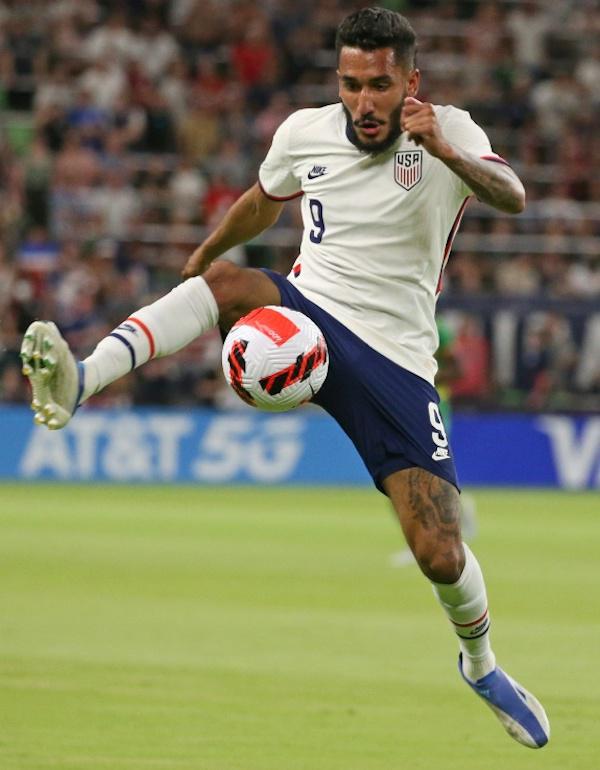 It’s been more than eight years since the USA has scored at a men’s World Cup. It was Julian Green, scoring a late consolation goal in the USA’s 2-1 round of 16 loss to Belgium at the 2014 World Cup.

Dempsey had also scored once each at the 2010 and 2006 World Cups. Dempsey’s four goals is one less than the five scored by Landon Donovan, whom Coach Jurgen Klinsmann kept off the 2014 roster. Donovan scored twice at the 2002 World Cup and three times during its 2010 round -of-16 appearance.

Jesus Ferreira was 18 months old and living in Colombia when the USA reached the 2002 quarterfinals, its best finish of the modern era. At age 8, he moved to the USA when his father, David Ferreira, signed with FC Dallas.

“Growing up I didn’t watch much soccer outside of my dad and the league that he was in and his national team games,” Ferreira said. “But now I’ve obviously heard about Landon Donovan and Clint Dempsey and the huge goals they scored for the U.S.”

David Ferreira played 39 times for Colombia and while he starred in MLS — he was 2010 MLS MVP — Jesus Ferreira thrived in FC Dallas’ academy. That put him on the fast track to the pro game.

He signed an FC Dallas Homegrown contract at age 15 in November of 2016, made his MLS debut at age 16, and scored his first MLS hat trick at age 17. This year, at age 21, Ferreira is the highest-scoring American in MLS with 18 goals and 5 assists.

“I think I've grown a lot after moving around positions year after year,” he said. “For me, to play more of a finisher role now, I’m excited because that’s something that always brings me joy in the field, which is scoring goals.”

In his previous MLS seasons, Ferreira also played as an offensive midfielder, second striker and winger. His previous highest goal production was eight, in the 2019 and 2021 seasons.

It’s not just his positioning on the frontline that led to the most productive soccer of Ferreira’s career.

"There are a lot of things that I've worked on myself outside that have helped me be in this position, starting with my mental health," he said. "That's a huge part of me just recognizing what I have to improve on the field and outside the field.”

Ferreira, atop the USA’s center forward depth chart ahead of friendlies on Friday against Japan and Tuesday against Saudi Arabia, says he's benefited from consulting a soccer-knowledgeable sports psychologist.

"I've always had problems with my mood," Ferreira said during the USA’s video press conference on Tuesday. "When some things don't go my way on the field or I mess up, I kind of tend to shut down. …

"Obviously, I have coaches that would help me move on, but I knew that I needed more help. … [Now] I can move on faster when things aren't going my way. I just think about positive things and making sure that I'm thinking about having a good game instead of my final product."

Feeling good his about contributions — fending off frustration when he doesn’t hit the net — has been an important part of his development.

"I noticed this at the beginning of this year … a good amount of games that I went into without scoring and for me, my goal was to score,” he said. “A lot of that was a lot of pressure on myself from myself, and I needed to focus on clearing that out of my mind and making sure that I knew that goals will come.

"I had a group of friends, coaches and teammates that came to me and made sure to let me know that I bring more to a team than just scoring and that's what kind of led me to work on my mental health."

Ferreira started two World Cup qualifiers — scoring in a 5-1 win over Panama last March — and came off the bench in the second half of five others. In June, after Ferreira went scoreless in friendly starts against Morocco and Uruguay, he still drew praise from Coach Gregg Berhalter, who called him a “pressing animal.”

He scored four in the next match, a 5-0 win over Grenada in the Concacaf Nations League.

Ferreira cited Gabriel Jesus and Sergio Aguero as center forwards he looks up to because they’re, “No. 9s that would drop down and help in the buildup, and would score goals and assist and do everything.”

The other center forwards currently in camp are Josh Sargent and Ricardo Pepi, Ferreira’s former FC Dallas teammate who’s aiming to bounce back at Groningen FC after a frustrating stint with Augsburg.

“'We have a great competition between each other,” said Ferreira. “The 9s believe in each other and we know that we want each other to succeed. That's our main goal. If we all succeed, the team will succeed.”