Turn off the lights, turn off the beer taps: Bayern Munich's 'in crisis' 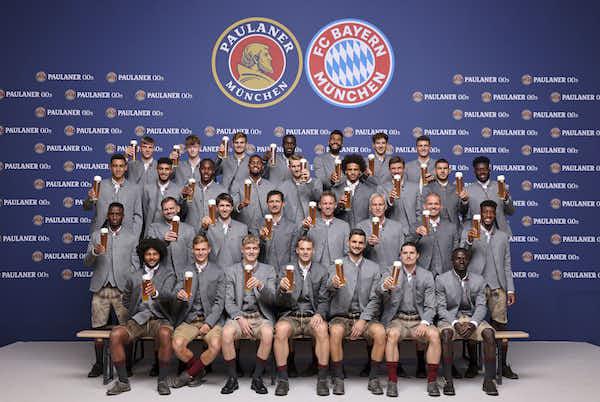 If you believe the German media after this past weekend's games, the soccer club Bayern Munich is "in crisis." What's happened? Did Russian military forces bomb their stadium? Did the entire staff come down with a new and critical variant of the coronavirus? Were energy bills so high that they had to turn out the lights and withdraw from the Bundesliga?

None of those things. They lost a game of soccer by a single goal to zero, their first defeat of the season.

It's all relative, of course. Bayern has won the last 10 Bundesliga titles, and this season has already beaten Inter Milan and Barcelona in the UEFA Champions League. But on Saturday Bayern lost 1-0 to perennial underdogs Augsburg, following three successive ties in domestic play. Three points from four games. Shocked looks — Bayern is not already 10 points clear at the top by mid-September. So, it must be a crisis.

German fans have been delighting in a photo of Coach Julian Nagelsmann with Bayern's director of sports Hasan Salihamidzic and club chairman Oliver Kahn at the opening of the Munich Oktoberfest on Sunday. Nagelsmann had declared after Saturday's defeat that he wasn't in the mood for the annual photo opportunity, and was likely going to skip the obligatory shot of him in local costume brandishing a liter of beer. Sadly for him, the club's contract with its sponsors dictated otherwise, and he had to show up. Only the spouses manage to look like they're having a good time.

Nagelsmann, Kahn and Salihamidzic look like someone's pulled down their lederhosen and stuck a weisswurst where the sun don't shine. Cheer up, lads, no one likes a buzz-killing sore loser!

Fans too are having trouble ranking the importance of soccer. Just as Bayern's officials were starting to weep into their seasonal beers, Borussia Mönchengladbach's game with RB Leipzig was brought to a halt by referee Patrick Ittrich when home fans unfurled an offensive banner aimed at Leipzig's coach Marco Rose (ex-Gladbach) and its imminent new sports director Max Eberl — who resigned from Gladbach earlier this year claiming the stress of soccer was affecting his health. For many Mönchengladbach fans, Eberl's comeback has been a little too swift for their liking, and on top of that to a club they hold in contempt for having piggy-backed its way into the league in 2009 by a USA-style franchise buyout of fifth-tier Markränstadt.

As Mönchengladbach was leading 2-0 when Ittrich took the players off the field, the fans promptly took their banner down, fearing that the game would be abandoned and have to be replayed. Ultimately, the three points were more important than the fans' point that Rose and Eberl have supposedly sold their souls. Gladbach's midfielder Christoph Kramer criticized the incendiary banner after the game: "I can't be a part of this hatred," he told a TV interviewer. "Marco Rose is a wonderful human being and coach too, and I'm really fond of him. As a soccer romantic, I'm not the hugest fan of RB Leipzig — but hatred has no place in the stadium, and not in the world beyond either."

And yet hatred is all too big a part of the game, reflecting the world beyond. In the past fortnight, fans of FC Cologne and Eintracht Frankfurt have been involved in serious violent incidents on away trips to Nice and Marseille. Last weekend, Werder Bremen fans looked ready to lynch Augsburg's goalkeeper Rafal Gikiewicz after he saved a 94th minute penalty to preserve a 1-0 win. Gikiewicz had been seen digging at the penalty spot with his heels before the kick, then made a provocative gesture at the home fans after the save, pointing at them and making the 'be quiet' gesture with a finger to his lips. He claimed the fans had been insulting him throughout the second half. He forgot that, as far as fans are concerned, insults are a one-way street.

So much useless anger, vented at sporting events of no fundamental importance. So much superficial emotion, so many apparent crises, so much primitive, macho behavior in defense of an imagined territory or sense of 'honor.' And just now and then some words of sanity, like Kramer's. Or, U.S. striker Terrence Boyd of second division Kaiserslautern, who gets the last word in this week's column. Boyd was asked by the magazine 11 Freunde this summer why he always seemed so relaxed about the game:

"When you put soccer in perspective," the player pointed out, "it suddenly appears small and insignificant. In her first two years my eldest daughter had febrile seizures, 10 times. The first time it happened, I thought she was going to die in my arms. What's that compared with a lost game of soccer?"

(Ian Plenderleith’s new book "Reffing Hell: Stuck in the Middle of a Game Gone Wrong" is available on Amazon Kindle in the USA, or as a good old-fashioned print book directly from its UK publisher, Halcyon.)

germany
8 comments about "Turn off the lights, turn off the beer taps: Bayern Munich's 'in crisis'".
Read more comments >
Next story loading