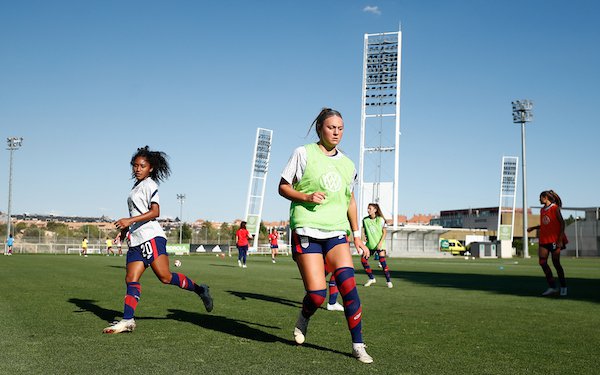 Head coach Natalia Astrain has named the 21 players who will represent the USA at the 2022 Under-17 Women’s World Cup to be held in India Oct. 11-30.

This spring's Concacaf Women’s U-17 Championship in the Dominican Republic, where the USA won all seven of its games, was its first international competition due to Covid-19 restrictions. Most recently. Astrain's U-17s traveled to Spain, where they beat and tied Spain and beat Germany.

“I give a lot of credit to players for how much this group has grown in a short time," she said. "They are a very united team, not only in their dedication to playing our style of soccer on the field, but in supporting each other off the field.”

• The squad includes midfielder Mia Bhuta, the first-ever player of Indian descent to represent the USA in a women's world championship. Her father was born in Mumbai and came to the USA when he was 16 years old.

• San Diego Surf, Solar SC, Internationals SC and the Courage academy have two players each on the U-17s.

• One player -- Gisele Thompson -- plays for a Total Futbol Academy boys team in MLS Next.

• Melina Rebimbas and Amalia Villarreal lead the USA with eight goals each at the U-17 level.