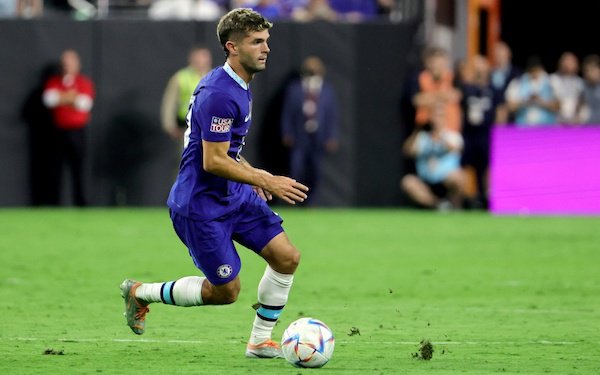 U.S. head coach Gregg Berhalter believes "ultimate competitor" Christian Pulisic will shine on the World Cup stage as his team steps up preparations for the finals with a friendly against Japan on Friday.

Pulisic has joined up with the U.S. squad after a tumultuous start to the Premier League season at Chelsea that saw manager Thomas Tuchel fired after just six games.

Pulisic has also struggled to nail down a starting spot for the Blues, making just one league start.

Nevertheless, Berhalter said Thursday he fully expects Pulisic to flourish at the World Cup in Qatar, where the USA faces Wales, England and Iran in the group stage.

"I think Christian is an ultimate competitor," Berhalter told reporters on a video conference call.  "He just turned 24 on Sunday, and it seems like he's been in football for the last decade. You know he's seen it all, done it all. I think the World Cup will be a great moment for him as a player."

Berhalter added that Pulisic's challenges at Chelsea, where he has been in and out of the team since joining in 2019, have strengthened him as a player.

"What I've seen the most from him is his growth as a person, and that's been gratifying over these last three and a half years," Berhalter said. "He's really mature, really has been able to handle adversity.  Every player's situation at their club is different, and it's how they navigate through that that's important.  And he's navigating through it in a great way. I'm excited to see what the future holds for him."

Friday's friendly in Dusseldorf against World Cup qualifiers Japan is one of only two games Berhalter's side have scheduled before they kick off their World Cup campaign against Wales on Nov. 21. The Americans face Saudi Arabia in Murcia, Spain next Tuesday in their final warm-up.

Berhalter's preparations have been complicated by a slew of injuries to several players who are almost certain to be in his final World Cup squad.

Timothy Weah and Antonee Robinson are both injured, while goalkeeper Zack Steffen has an ongoing knee problem.

Defender Miles Robinson remains touch-and-go for Qatar as he recovers from a ruptured Achilles suffered in May, while Valencia's dynamic midfielder Yunus Musah will miss the two friendlies with a groin injury.

With uncertainty surrounding the USA's center-forward position, the Japan and Saudi Arabia games are a chance for Norwich's Josh Sargent to nail down a World Cup ticket.

The 22-year-old centre-forward has scored six goals for the Canaries this season, and Berhalter says he has been impressed by Sargent's physicality and sharpness in training this week.

"He looks great," Berhalter said. "Confidence is a big thing but also strength: he's gotten bigger, he's gotten stronger, gotten quicker, more decisive with his movements.  He's looked really good in training, and it's been good to have him in camp. He's had a tough road but now it shows what he can do when he’s in form."