Japan, one of the most dynamic teams at the 2018 World Cup, where it lost, 3-2, to Belgium after leading 2-0 in the round of 16, provided a sobering test for the USA 58 days ahead of the 2022 World Cup. Coach Gregg Berhalter's team failed to establish any rhythm or put a shot on target during its 2-0 loss on Friday. 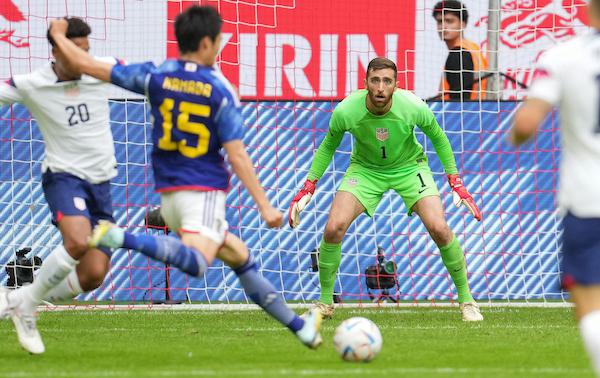 Half of Japan's 16 shots were on target: The two goals and six saved by Matt Turner, whose diving efforts on low shots in the 13th and 65th minutes were particularly impressive. Turner also did well with his feet on back passes as the Japanese pressured. When Sam Vines after a bad touch delivered the ball to Turner with Daizen Maeda storming in, Turner's clearance that didn't reach a teammate was about the best he could do.

Walker Zimmerman blocked shots in the 5th and 11th minutes, then in the 13th minute he gave the ball away to Takefusa Kubo, who set up the Daichi Kamada shot that Turner saved well. Zimmermann was, as usual, dominant in the air, but the Japanese were savvy enough to play low most of the time. The other starting central defender, Aaron Long, played the first 45 minutes without increasing his stock. Right back Sergino Dest's 7th-minute foray provided the USA's only first-half chance but his cross was inches too high for Jesus Ferreira to connect well with. While Dest, who managed to prevent successful left flank attacks from the Japanese, left at halftime, Sam Vines played the full 90, and struggled against Japan's right wingers. On the other end, he delivered one accurate cross.

Against an attack-minded team that kept its outside backs pinned down, the USA could have used an extra man in midfield. Instead, the trio played without cohesion, failing to keep possession long enough to allow the defenders to move upfield or for forwards to free themselves of backline marking. Weston McKennie lost the ball ahead of Japan's first goal and in the 56th minute when Turner's save prevented a déjà vu. Rarely did the USA win balls in midfield and Tyler Adams did more chasing that intervening. His best moment came when he delivered a pass late in the game to Brenden Aaronson. Luca de la Torre's usually adept ball control proved ineffective against the Japanese, who closed in quickly and allowed few options.

On a frontline that rarely received passes, Gio Reyna and Jesus Ferreira each played the first 45 minutes. Ferreira headed his chance over the crossbar on the Dest delivery that wasn't easy to reach. Reyna, in his first international start in more than a year, showed flashes of clever play, mainly when he moved into the midfield, such as when he delivered the pass to Dest on the Ferreira chance and in the 18th minute. After starting deep in the U.S. half, Reyna orchestrated a rare sustained possession by the the USA, which ended when de la Torre was tackled by Kubo. Brenden Aaronson, who played the whole game, succeeded in getting more of the ball than the others. But his forays ended with some rough play by the Japanese, some clean tackles, the inability to find the right pass, and a shot wide from 18 yards in the 80th minute. (Christian Pulisic was a late scratch "because of a knock he took in training.")

Reggie Cannon came on as right back for the second half and got overwhelmed by Kamada and Kaoru Mitoma, who scored Japan's second goal. Malik Tillman whiffed on successive attempts to connect with Vines' delivery near the penalty spot. Josh Sargent didn't get service to unleash a shot and couldn't beat Japanese defenders on the dribble.