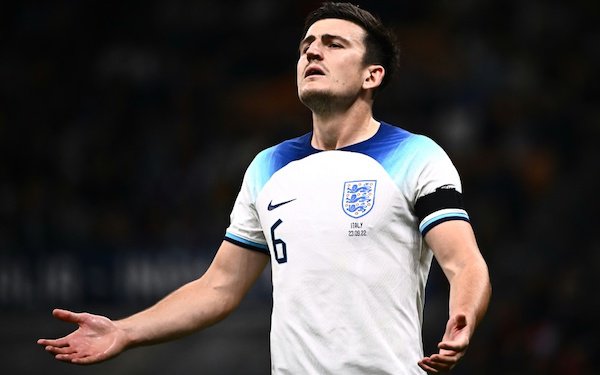 Gareth Southgate claimed England have taken a "step in the right direction", but relegation from the top tier of the Nations League suggests the Three Lions' are sliding.

Southgate has less than two months to stop the rot before England's World Cup starts in Qatar, but there was little evidence of the tide turning in a 1-0 defeat to an experimental Italy team at the San Siro on Friday.

Germany's visit to Wembley on Monday is England's only match before the World Cup. Rather than use a final chance for experimentation, Southgate doubled down on his principles in Milan. He suggested he will do likewise in Qatar.

"I compromised certain decisions internally, and you don't win if you compromise," said Southgate of England's run of four games in June that produced just two points and one goal.

The back three that got England to the World Cup semifinals in 2018 and the Euro 2020 final just 14 months ago was restored, with Harry Maguire at the heart of it despite his lack of game time for Manchester United.

Although Southgate said the performance was much improved from the summer, the same problems persisted. England was toothless in attack, taking its run without scoring from open play to 495 minutes, and prone to lapses in concentration at the back.

Once again, the array of creative talent at Southgate's disposal either failed to deliver on the international stage, or was left out entirely.

Without a win in five competitive games for the first time since 1992, England joins San Marino as the only other side yet to have scored from open play in this edition of the Nations League.

As a result, the next time round it will face the likes of Albania, Montenegro, Kazakhstan and Georgia rather than Germany, Spain and Italy.

But it is the danger of wasting the chance to win a World Cup with a richly talented squad in their prime years that is of most pressing concern to England fans.

Southgate worked wonders in building a structure for success after the embarrassment of a Euro 2016 exit to Iceland.
He led his country to a first World Cup semifinal for 28 years and then a first major final for 55 years.

Yet, the increasing evidence is that the peak of his time in charge may have come and England is hitting the downslope straight into a World Cup like no other.

"No cohesion, no shape, no belief. But no surprise what happened here in Milan," wrote The Times' Henry Winter. "England have a crop of good players being wasted by Southgate."

That is a feeling shared among a fanbase that booed their manager at full-time.

In his defense, Southgate pleaded a much tougher run-in to a major tournament than any of his predecessors have faced.
Just eight days will separate the final round of Premier League fixtures from England's opening game of the World Cup against Iran.

A soft-looking group on paper, also featuring Wales and the USA, may gives Southgate's men the time they need to find their feet.

But failure to deliver even a consolation win at Wembley against Germany will likely see the Three Lions sent off to the World Cup with more abuse ringing in their ears than a show of support.