Unlike the Japanese, who last Friday in their 2-0 win swarmed and stifled the USA, Saudi Arabia gave the Americans plenty of time with the ball and space in midfield and on the flanks. But the USA lacked the passing precision and clever combination play required to create scoring chances. It plodded to a 0-0 tie in a scrimmage atmosphere on Tuesday in Spain. 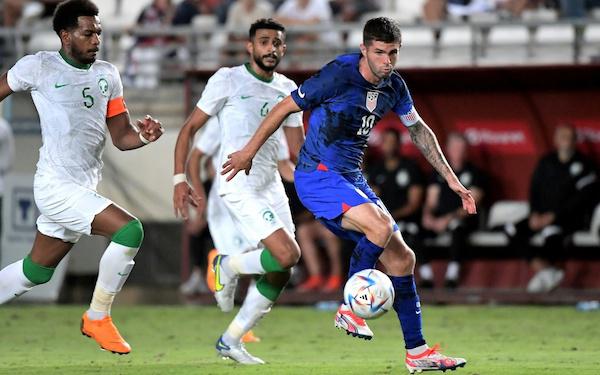 Matt Turner made one routine save in each half — on low shots from outside the penalty area — but didn't hold on to the ball on either. On an 80th minute Saudi corner kick, Turner stayed on his line and was lucky Abdulelah Al Amri headed high from inside the goal area.

Central defender Aaron Long's first touch was booting the ball out of bounds, his second was a header to Hattan Bahebri, and in the 15th minute he sent the ball straight to Nasser Al Dawsari, ending a 14-pass sequence by the USA. Walker Zimmerman hit some impressive long-range and cross-field passes, but also mis-played simple ones, like in 82nd minute when his pass missed Joe Scally by five yards and rolled out of bounds. Left back Sergino Dest's dribbling from his own half into Saudi territory reminded one of how dynamic he can be at his best. But that, like everything else that came from the U.S. flanks, failed to bear fruit. At least Dest and right back DeAndre Yedlin sparked some attacks — something that could hardly be said of the U.S. midfield — but Yedlin's crosses didn't trouble the Saudis.

From mis-hit passes to fouling a defender in the Saudi half who was facing his own goal, Kellyn Acosta, the midfield's elder statesman, failed as stabilizer after replacing Japan game starter Luca de la Torre. The marauding Weston McKennie played mistake-prone ball in attack and defense. It would have been difficult without a scoresheet to tell that Acosta, McKennie and Tyler Adams were supposed to be a trio. The midfield failed as a group and individually to bring rhythm or creativity to the U.S. game.

Experiencing muscle tightness and subbed after 30 minutes, Gio Reyna found Ricardo Pepi with a through ball in the 4th minute, but the center forward was offside. Reyna's free kick after being fouled provided a chance for Christian Pulisic that he headed meekly wide. Pulisic, who wasn't going to get balls to his feet upfront, tried to get the offense going by retreating to midfield, but the Saudis made sure to limit his options. The only shot from the starting forwards was the Pulisic header. Pepi was subbed after a lonely 59 minutes.

Aside from McKennie, who had a weak shot in the first half, Jesus Ferreira was the only American to force a save by goalkeeper Mohammed Al-Rubaie. After receiving the ball from Reyna's replacement Paul Arriola, who latched on to a poor Saudi pass in the back, Ferreira shot from 13 yards between two defenders and straight to Al-Rubaie. Ferreira flicked a ball to set up Arriola's lone shot in the 87th minute. Arriola missed by far, striking it like he was trying to hit the moon. Joe Scally got so much of the ball that it seemed the Saudis were welcoming the USA's ineffective crosses. The hope that Scally would bring value to the game faded with each unsuccessful delivery. Mark McKenzie gave the ball away shortly after coming on. A few minutes later he was robbed a second after he intercepted a pass.