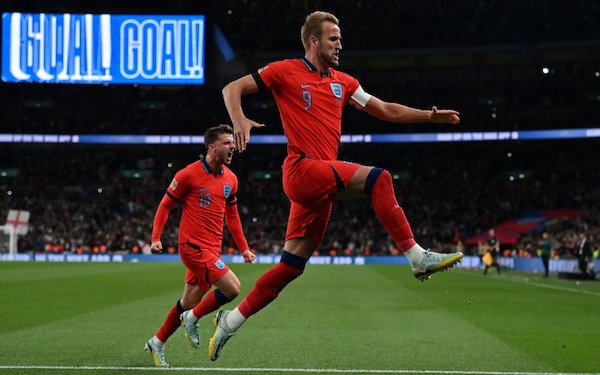 England captain Harry Kane said the Three Lions are in a good place heading into the World Cup after a 3-3 draw with Germany on Monday despite going to Qatar on a six-game winless run.

Kane looked to have completed a comeback win for Gareth Southgate's men as they came from 2-0 down to lead 3-2 at Wembley before Kai Havertz salvaged a point for the visitors in the final UEFA Nations League match.

"The mentality and fight of the team was shown out there today," said Kane, who moved to within two goals of matching Wayne Rooney's record of 53 goals for England. "We didn't get the win but we can be proud of what we did and it puts us in a good place ahead of the World Cup."

Despite leading England to the semifinals of the 2018 World Cup and a first major tournament final for 55 years at Euro 2020, Gareth Southgate was under the spotlight after it was relegated from the top tier of the Nations League with a game to spare.

England had not scored a goal from open play in its opening five games in Group A3, but Kane is confident it will respond to the heightened pressure of a major tournament in two months' time.

"Major football tournament is different to any other football you play for England. The pressure is high and the concentration has to be high and I feel like we respond well to that," he added. "We've upped our game as we've gone along in the last two major tournaments.  We dust ourselves down, we know we have to improve but there isn't that much time now with England before that first game. We'll go away with our clubs and hopefully everyone goes away fit, strong and is ready to come back in November."

The knives were being sharpened for Southgate after his faith in Harry Maguire backfired for two German goals early in the second half.

Maguire has been publicly backed by the England boss despite being dropped at club level by Manchester United manager Erik ten Hag.

Ilkay Gundogan slotted home the opener from the penalty spot after Maguire gifted possession to Jamal Musiala and then chopped down the Bayern Munich midfielder. Havertz then curled brilliantly into the top corner after Maguire was dispossessed in the German half.

But two goals in three minutes transformed the atmosphere around Wembley and the scrutiny on Southgate's position heading to Qatar.

Luke Shaw was also restored to the starting lineup despite his lack of game time at United and started the comeback by volleying in at the back post.

Moments later, two of Southgate's substitutes combined to deadly effect as Bukayo Saka set up Mason Mount to curl home. Kane looked to have completed the turnaround from the penalty spot seven minutes from time after Nico Schlotterbeck's challenge on Jude Bellingham was punished following a VAR review.

Yet, there was more drama to come as keeper Nick Pope spilled Serge Gnabry's shot and Havertz pounced on the rebound to snatch Germany a point.

Despite the disappointment of a late equalizer, there was relief for Southgate that England's attack finally came to life after accusations that his conservative tactics were to blame for a lack of goals.

"The whole experience has been what we needed," said Southgate, who had been booed by England fans after a 1-0 defeat to Italy in Milan on Friday. "You are going to have pressure in a World Cup. You can try to avoid pressure, but it's coming. It's better that we feel it and know how we deal with it. The players reacted in the right way -  we showed character but a lot of quality."