Mexico: Expectations among most El Tri fans are lowest in decades 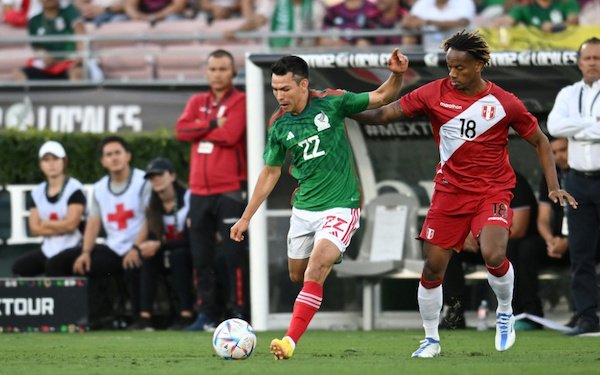 Gerardo "Tata" Martino emerged from the first of his final two sort-of-domestic preparation matches for the coming World Cup in great spirits, delighted by the fight Mexico presented in posting a late 1-0 Rose Bowl triumph over Peru.

If it wasn't nearly enough to pacify his critics, a nation with a large and growing population, so be it. Martino, increasingly defiant in response to the attacks on El Tri, found reason for optimism two months before its tournament opener from Hirving Lozano's late strike Saturday night in front of 62,729 fans, the vast majority in green.

"The first 30 minutes left me content," he said in Spanish to start his postgame media session. "Unfortunately, we could not sustain it longer than that, but this is an opponent that easily could have been in the World Cup. We need to be better. but this definitely leaves us in a more positive state, because this is a match that in the last year we would have lost."

So a step forward, it seems, however incremental it might appear. Results will ultimately determine Mexico's fate in Qatar, of course, and ugly wins count the same as stylish victories, but there's not been much on either front in at least the past year and a half to bolster confidence among media and fans in Martino nor his team, and pulling out a late win in an uninspired outing isn't about to change that.

Expectations for World Cup success -- reaching the round of 16 from a tough group featuring Argentina and Poland would somewhat suffice, with the real aim the elusive "fifth game" -- haven't been so dire since El Tri last reached the quarterfinals, at home 36 years ago.

Mexico qualified second, on goal difference to Canada, from Concacaf with an 8-2-4 record but was 1-1-3 and outscored, 4-3, in games against the regions other three World Cup-bound sides. (It scored just once in its Estadio Azteca encounters with Canada, the United States and Costa Rica, drawing against all three.) Losses to the U.S. in Concacaf's Gold Cup and Nations Cup finals last year, compounded by another "dos-a-cero" defeat to the Yanks in an Ohio qualifier, added fuel to the blaze.

Martino's team hasn't impressed with its play nor its results not its inability to field a coherent attack, and many fans are unhappy he's ignored all-time El Tri goals leader Javier "Chicharito" Hernandez, who outscored the Mexicans on Saturday, netting his 16th and 17th of the Major League Soccer season in the LA Galaxy's 3-2 triumph over San Jose at Stanford.

The Argentine coach, who won the 2018 MLS Cup title with Atlanta United, was asked following a 1-0 loss Aug. 31 to Paraguay in Atlanta whether he's "felt like a public enemy."

Fans at the Rose Bowl concurred.

"The head coach, we want him out," said Edgar Granados, 27, of Fresno, garbed in Mexico's green jersey and waving a Mexican flag so huge that security told him, before he'd stepped into the entry line, he'd not be able to bring it into the stadium. "He's leaving our best players out. Chicharito. We need him. He's been scoring, he's showing that he's capable of winning.

"Scoring goals is what we need, and he's the one, but I don't know what's wrong with Tata Martino. He needs to let his ego go and bring him [to Qatar]."

"I think we don't have any chance, honestly, to pass through the third game. I think we'll just play three games [and exit following the group stage for the first time since 1978] ...," he said. "I think this is the worst team we've ever had."

The core of the problems are in attack -- El Tri labor to create chances, then more so to put them away -- and injuries are exacerbating things. Wolverhampton striker Raul Jimenez, who has 30 international goals, is dealing with a groin injury that followed a preseason knee injury, and there's no telling when he'll be ready to go.

Martino brought Jimenez to California, long a home to the national team and more so since the Federacion Mexicana de Futbol signed on two decades ago with Soccer United Marketing, MLS's commercial arm, a partnership that was just extended through 2028. He didn't play against Peru, of course, and won't Tuesday night against Colombia at Levi's Stadium in Santa Clara, but Martino said he wanted "our No. 9" around to keep him connected with the squad, "keep his spirits up."

That wasn't the only reason. The desire for Mexico's medical staff to examine Jimenez was paramount, and the news wasn't good.

"I'm optimistic that he'll be ready," Martino said after the Peru game. "But the truth is it's something that needs to be treated. It's no small thing."

Monterrey's Rogelio Funes Mori, Martino's No. 2 choice up top, is dealing with a thigh ailment, the third in a series of injuries dating to last spring. He's also in California but unable to play and was working with the ball off to the side during Mexico's open training session Friday. That leaves Henry Martin from Club America and Santiago Gimenez, the latter the likely man out when Martino settles on his three strikers despite strong form at Feyenoord, the only healthy No. 9s available among the four under consideration.

Mexico already has lost Sevilla winger Jesus Manuel "Tecatito" Corona, who last month suffered a broken leg and torn ankle ligaments in training, injuries the club said would require four months' rehabilitation. Martino believes that's an exaggeration, that Corona could be back in time for the World Cup.

"Our hope," he said, "is that the first days of October, he can be working with us and have chances to fight for a place."

None of this breeds confidence, and if bashing El Tri on the eve of major tournaments -- often while setting unrealistic expectations -- might be Mexico's No. 2 sport, the vitriol within current criticism has been startling. Yet not surprising.

"It's part of being in the national team," captain Andres Guardado, a Real Betis midfielder who will retire from El Tri after the World Cup, said in English at last week's official "Media Day" at Dignity Health Sports Park, the Galaxy's home in Carson. "There's always been criticisms over the years, for one reason or another, and that's what they are and that's why we accept them. We really can't do much to [respond] aside from winning these matches."

"I think we have to believe in ourselves," he said in English. "Of course, during this three years and a half [within this cycle], you always have ups and downs. That's normal for a national team, because you don't have a lot of time [together] to work, to progress in your game. We have the time to work in these two months to be ready to have a good performance in the World Cup.

"We don't have control [of what's said about us]. We just have to take care about what's happening in the pitch, in the field. So I think that's the way we have to work, just thinking about our performance on the pitch."

Martino is looking at ways to deal with the scoring problem, which has less to do with those up top than with those providing service. Mexico has struggled in possession, and the coach confirmed that his choices in central midfield against Peru -- with Pachuca's Luis Chavez and Cruz Azul's Carlos Rodriguez in front of Ajax's Edson Alvarez in place of stalwarts Guardado and  Hector Herrera, who moved to the Houston Dynamo in July -- was about building better technical options in the buildup.

Martino, when asked what needed to fall into place for Mexico over the next two months, declined to go into detail.

"We always want to keep improving, want to work on all areas," he said. "Not one thing specific."

"I think the team has to improve in possession of the ball," he said in English. "Because as long as we're able to keep the ball longer, have longer possession, we'll be able to be in better positions on the field, so that when we lose the ball, we don't have the problems [from opponents'] counterattacks.

"It happens all the time in the Concacaf competitions because the other teams [set up their defenses] all the way back, and we have a lot of space in our back. I think we have to improve that, and we have to improve the finishing. We create so many chances and in the end we aren't able to score as many goals as we make the chances. I think that's the most important thing."

Granados believes Martin, who started against Peru, could be the answer.

"Or it could be 'Chucky' Lozano," he said. "But we also need Chicharito. That's who we need."

Lozano looks set as a wing in Mexico's three-front. Asked last week about Hernandez, a three-World Cup veteran with 52 goals in 109 caps who last played for El Tri in 2019, Martino said: "I've decided to go with other forwards." 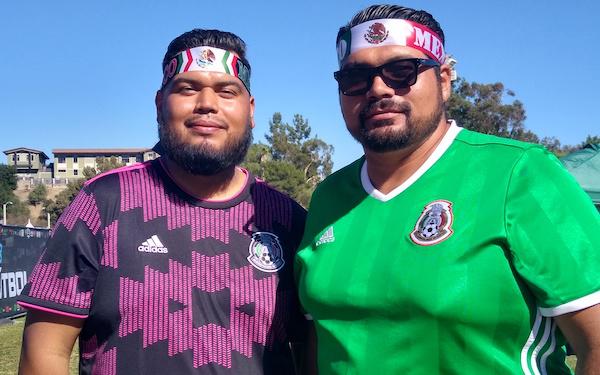 There is optimism within the fanbase.

"You've got to have faith, man," added his cousin Jose Orozco, 29, of Los Angeles. "We have faith and then perseverance."

Even Granados has faith.

"I'm going to be honest with you, as a Mexican fan," he said. "Yes, it is one of the weakest [of El Tri teams]. But we have pride in us, so we have a lot of hope. I am [optimistic]. We always have our hopes up."

If the performance against Peru offered scant hope, Martino mined it for all he could. Mexico played with vigor in the first 20 minutes, repeatedly marching into its attacking third but failing to create opportunities, and with far less energy after that. Peru's defensive organization couldn't be overcome, and victory came at the finish, in the 85th minute, and only on an opportune bounce from a corner kick.

Cesar Montes won a scrum to get his head to Jesus Antuna's serve, sending the ball just beyond the back post, and Lozano rocketed the ball into the ceiling of the net at the left corner. It was the game's only shot on frame.

The strike averted a fifth shutout in eight games since the close of World Cup qualifying and did little to mask a most pedestrian performance, but Martino was buoyed by the result.

"I feel happy, I feel excited, eager to face the challenge of the World Cup," he said afterward. “I have a positive feeling with the team in every way."