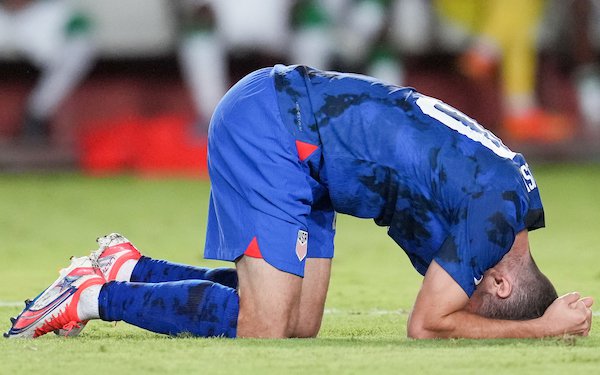 In an odd way, the Covid-19 pandemic shutdown in 2020 created an advantage for Gregg Berhalter and his young USMNT players.

As he doubled down on his youth movement, the Concacaf shutdown gave Berhalter's young stars a chance to break into their clubs without the time away and distractions of national team duty many of their club teammates faced in the first two fall windows in 2020. And when the USMNT returned to play for the first time in 10 months against Wales and Panama in November 2020, they were for games played in Europe. Not once during the 2020-21 club season did the USA's European-based stars have to cross the Atlantic to play for the national team.

Given the best possible circumstances to thrive, all of Berhalter's key young players enjoyed breakout moments in the year beginning with the return to play in the late spring of 2020:

• Christian Pulisic went on a tear at Chelsea, capping the 2019-20 season with a goal in the FA Cup final, and playing a big role in his club's 2021 Champions League title run.
• Tyler Adams came back from an extended injury layoff and scored the winning goal for RB Leipzig in the 2020 Champions League quarterfinals.
• Gio Reyna, still only 17, solidified his spot on the first team at Borussia Dortmund, playing 32 of 34 Bundesliga games and winning the German Cup.
• Weston McKennie moved to Italian giant Juventus and captured a pair of cup trophies in his first season.
• Sergino Dest joined Barcelona from Ajax and collected the Copa del Rey with Lionel Messi at his side.
• Like Adams, Tim Weah put an injury-riddled season behind him at Lille and helped Les Dogues win the 2021 Ligue 1 championship.

Problem is, that success wasn't sustainable. The grind of World Cup qualifying was made worse by the crazy Concacaf schedule — 14 games in six months — and it hit the players hard when it finally came. Only Adams managed to play in all five windows, and only Adams and Weah started a majority of the qualifiers.

Reyna, felled by a series of complicated hamstring and thigh injuries last season, doesn't really count here, but the USA's big six have all failed to improve from their peak form of 2020-21.

Adams is starting at Leeds United after being rescued by his mentor, Jesse Marsch, from a dead-end situation at Leipzig. McKennie is starting on a bad Juventus team, battered by injuries in midfield. Pulisic has started one Premier League game this season for Chelsea, and Dest has yet to start this season, either for Barcelona, where he was shown the door in a very public way, or for AC Milan. Dest was called for a penalty kick foul shortly after coming off the bench in his Serie A debut.

Weah? He has yet to play this season for Lille due to an ankle injury — he wasn't projected to start — and missed the USA's two September friendlies against Japan and Saudi Arabia.

Pulisic looked a shadow of his former self. Dest was the one thing you'd never say about him (sometimes for the good, sometimes for the bad) and that is he was invisible, Adams and McKennie weren't much better than they were against Japan, which was atrocious, and Reyna went off in the first half, exiting straight to the tunnel with what was described as a "precautionary move" due to "tightness."

You could see it in facial expressions and body language. The confidence of USMNT players appears to be shot. Less than eight weeks before their World Cup opener, that's a big problem.

There are many reasons for the USMNT's second straight poor performance — beginning with fundamental weaknesses in the team that injured players like Chris Richards, Antonee Robinson, Yunus Musah and Weah often patch over when they play — but Berhalter suggested "stress" and "anxiety" about making the final roster were to blame for the poor play.

“I told the guys, I feel for them, it's a difficult situation to be in. Everyone's fighting for roster spots,” he said. “And instead of coming out and really performing like the team we know we are, we lacked a little confidence, and I think that hurt performance."

As true as that might be, some of the worst performances over the window were by players like McKennie and Adams who should have no reason to worry about not being on the plane to Doha.

Creating culture. Berhalter was in a somber mood after Tuesday's game in Spain. The shock of the Japan game had worn off, and the reality of the situation has hit. The USMNT is facing a crisis of confidence.

Teams go through it all the time, but the USMNT is lacking a core group of players who can say they've gotten through it before. Time and again, Berhalter has pointed out how young his team is. Seven players who played against Saudi Arabia are 21 years old or younger.

With his young team clearly in mind, Berhalter has studied the issue of creating a culture and sustaining it within a group. He has often mentioned the book "How: Why How We Do Anything Means Everything...in Business (and in Life) by Dov Seidman.

His task of bolstering the confidence of his group is complicated by the issues many of the young leaders in his group face in their own careers. Empowering older players is a huge consideration, which explains why players like Sean Johnson, Cristian Roldan and Paul Arriola have a place on the updated (post-Murcia) who's-going-to-Qatar lists by some veteran USMNT media watchers.