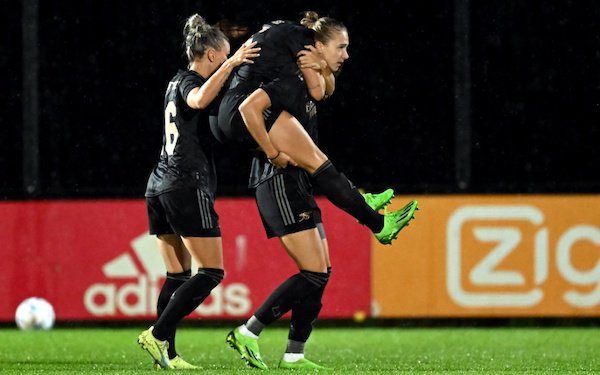 Dutch striker Vivianne Miedema scored the only goal as Arsenal reached the Women's Champions League group stage with a 1-0 win over Ajax on Wednesday.

The 26-year-old Miedema found the net with a 20-yard strike in the 51st minute in Amsterdam to secure a 3-2 aggregate win after the first leg of their qualifier had ended 2-2.

Also going through on Wednesday was Paris Saint-Germain, which claimed a 2-0 win at Swedish club Hacken in Gothenburg for a 4-1 aggregate win. Lieke Martens and Kadidiatou Diani scored second-half goals for the French that has twice been runner-up in the competition. Both Martens and Diani had also been on the scoresheet in the first leg.

Real Madrid, which made the quarterfinals last season, booked its place with a 2-1 win over Rosenborg for a 5-1 aggregate win.
Madrid fell behind on the night after just eight minutes when Emilie Nautnes scored.

However, Caroline Weir, who scored twice against former club Manchester City in the previous round, pulled the Spaniards level on 48 minutes with Athenea del Castillo hitting the winner just after the hour mark.

Slavia Prague became the first Czech team to reach the group stage after edging out Valur of Iceland 1-0 after a goalless first leg.
Vllaznia also broke new ground when it became the first Albanian club to reach the last 16 of any UEFA competition since the KF Tirana men's team in the 1989-90 European Cup.

Gresa Berisha was the star for the Albanians with a spectacular half-volley two minutes from time ensuring a 2-1 win over Vorskla-Kharkiv of Ukraine and 3-2 victory on aggregate.

Sara Bjork Gunnarsdottir scored for her fifth different club in the competition as Juventus defeated Koge of Denmark 3-1.
Benfica saw off Glasgow Rangers 2-1 after extra-time for a 5-3 aggregate triumph. Emma Watson, just 16, had pulled Rangers level in the series with an 87th-minute strike, but Cloe Lacasse and Jessica Silva sent the Portuguese club through with goals in overtime.

The final two teams will be determined on Thursday.

The draw for the group stage takes place at UEFA headquarters in Nyon, Switzerland, on Monday with 16 teams divided into four pools.