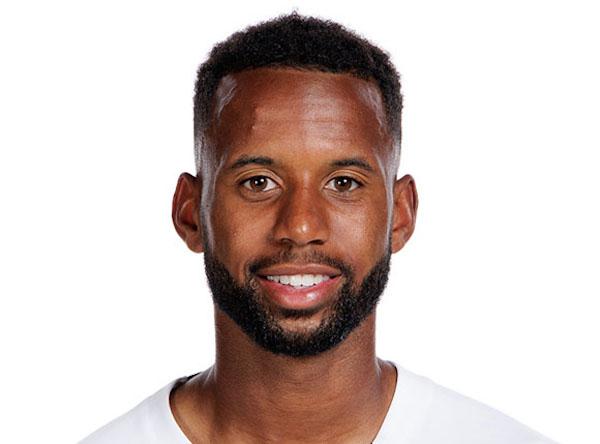 At 27 years old, Kellyn Acosta has already played MLS soccer for a decade. He's represented the USA at a U-17 World Cup, two U-20 World Cups, and is aiming for the 2022 World Cup. Acosta is also the official ambassador of the USA's Amputee national team, which kicks off its World Cup campaign in Istanbul, Turkey, against England on Oct. 1.

SOCCER AMERICA: How did you hear about the Amputee World Cup?

KELLYN ACOSTA: It was kind of a freak thing. I got to LA and got hit up by a guy who was trying to sell me an electric bike. It was a bit random. I met with him, he came to the facility and broke the news to me that he's also one of the coaches for the amputee team.

They asked me to be an ambassador and that's when things kicked off.

I met some of the guys and they're just amazing. Great dudes. I saw their videos from qualifying and just had a huge appreciation for the sport and the people and their work ethic. It's amazing to connect with them — we all have the same dream, right? We want to play soccer and want to play in a World Cup?

They're amazing athletes. How fast do you think you could run a mile? 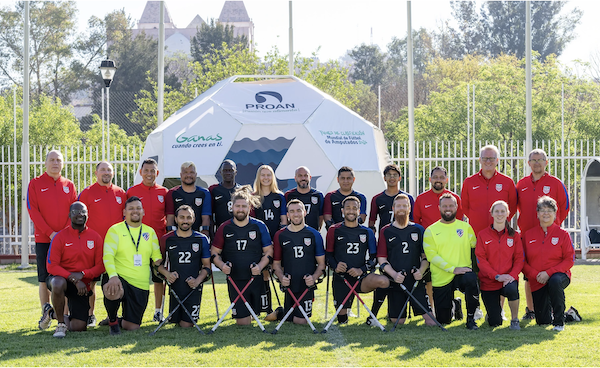 The Amputee World Cup is hosted by Turkey Oct. 1-9. The USA kicks off its Group A play on opening day before facing Argentina (Oct. 2) and Indonesia (Oct. 3).

KELLYN ACOSTA: Right. There's a guy on the team who does a mile in 7-something. With one leg. On crutches.

So you're talking about a freak athlete — next level.

SA: What kind of things are you doing as ambassador for the amputee team?

KELLYN ACOSTA: Obviously, the biggest thing is funding. The league isn't as known so it's about expanding their outreach and getting people to view the sport in a different lens. The ultimate goal is to build a league here in the U.S. There are teams scattered all around but we'd like to develop a league and make it bigger.

In Europe, it's huge and definitely growing. In the U.S, we're a little behind, so we want to speed up that process by getting their name out there and using my network to promote those guys.

For their trips and camps, they pay out of pocket, which is tough. 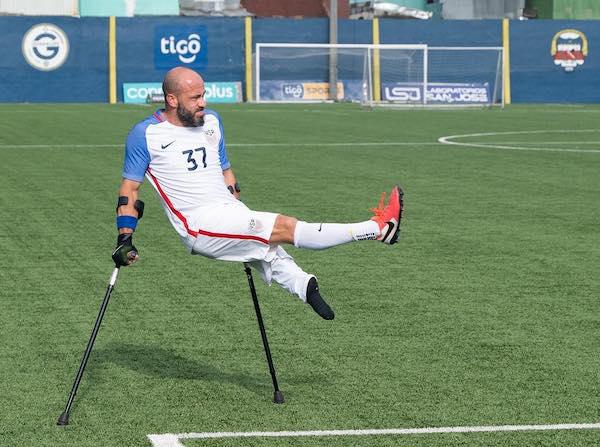 SA: Moving onto national team stuff. You are one of the few players who was on Bruce Arena’s roster in the 2018 cycle. Obviously, a lot of differences on many levels but what stands out to you in terms of the locker room and team chemistry?

KELLYN ACOSTA: I can really only speak on this cycle because I've been involved in a different capacity. I think we have a closer-knit group because, for starters, we're all fairly young and we've known each other since we were 13 years old playing on the youth national team. You already have a built in bond. We're playing with guys we've known for seven to 10 years already.

We're like a brotherhood — we really enjoy each other and it's always just exciting being with one another back at camp. It's almost like a reunion — it's like a getaway where I get to play with my friends.

KELLYN ACOSTA: It's been kind of a roller coaster. I started at the U-14 level and went all the way through. I played at a U-17 World Cup. I was part of two U-20 World Cups. I accomplished a lot and got hyped up a lot pretty early — it got overwhelming and I just wanted to play. It's different from the club and international level — you have more eyes on you and you're representing a whole country. You feel more of the pressure, in a sense.

In 2018, I was 22 or 23 and thought I'd be playing in the World Cup that summer. It was everything I dreamed of and this World Cup would've been my second. But things happen for a reason and although it was unfortunate I feel like it was positive in a sense because a lot of things changed behind the scenes.

A group of guys that was hungry and eager came in. Gregg [Berhalter] came in and I was ready to go, but it ended up being two years without the national team. It was a tough pill to swallow. It crossed my mind: Is this it? Is it over? I've played some games and it was cool, but the national team is hard to keep that up. I'm thinking in my mind, 'I'm done.'

SA: How much getting back into the national team picture was a motivator for you?

KELLYN ACOSTA: It was. Colorado was tough because in the beginning we weren't doing well. It wasn't helping my chances. We had a coaching change in Colorado, I started playing better, and things were beginning to fall in the right direction.

I just tried to put my head down and have tunnel vision. I can only focus on things around me — my work ethic, my attitude and just bringing it every single day. I eventually got another call-up in the December [2020] window and that got my foot back in the door. I knew I couldn't take that for granted — it might be my last opportunity until a new coach comes in.

And it's worked out since. I've been at every camp since then. 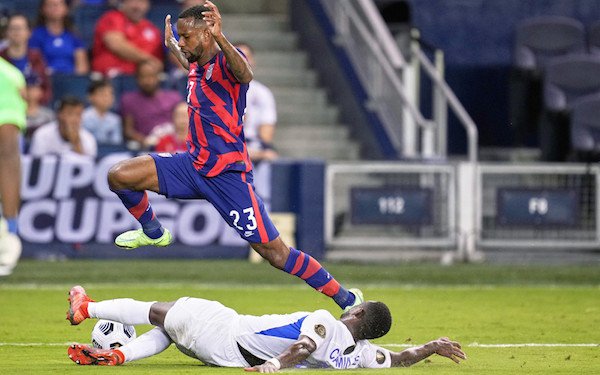 SA: What do you think are two things the American soccer media gets wrong about the U.S. men’s national team?

KELLYN ACOSTA: One is that no game is easy. People think that when you're playing a whatever country it should be a 10-0 game. The level of competition has definitely increased and certain circumstances of playing away — they are not easy games like people think.

That, for starters, is one thing.

I don't want to open up a whole can of worms, and I'm not trying to stir the pot by any means, but people have a negative outlook on MLS. They automatically think that if you're from MLS, you're not good enough. And that if you're in Europe, you have to be in the team.

That's not necessarily the case by any means. People fail to understand that. Nowadays it's just trendy to say that. I get it, but they use the results of the team and MLS players as scapegoats. If the game isn't going well, it's because of someone from MLS. But if so-and-so was there, it wouldn't happen. It's a coulda-shoulda-woulda — kind of frustrating, but that's football and you have to deal with it.

Instead of praying on the downfall of players on the team, if you really uplift, promote and help them, I'm sure we would have a stronger team. It's crazy — people want to see certain guys fail so bad just to prove their point. But it's like, don't you want the team to do well?

SA: The perception of guys in MLS vs. Europe in national team camp?

KELLYN ACOSTA: We're players of the national team and what you do at your club doesn't matter. You're on a new team and it's about how you fit into the puzzle of that team. Every training is super competitive and it's not like there's a huge drop-off. Everyone's there for a reason. People who are there deserve to be there and it doesn't matter if you're on a top team or the worst team — you're there for a reason.

People have to know that. They don't see the trainings. Obviously, you can't play your best game every game. That's the reality of it. One bad game doesn't mean you should be out of the fold completely. Some people have shorter leashes than others on the national team.

SA: If you could change one rule in soccer, what would it be?

KELLYN ACOSTA: Get rid of VAR. It's not that I don't like it — it's just that it was implemented to make the game fair. It's supposed to minimize mistakes, and even with VAR, they're making mistakes. Nowadays people don't know what the rules are.

SA: Best players you’ve played with and against?

Marco Verratti or Coutinho. I couldn't even get close to them.

SA: What does leadership look like on this U.S. team?

KELLYN ACOSTA: It's a combination of everything. I have a lot of experience so I try and use some of that to help everyone. I think when everyone comes in, they come in with a lot of responsibility. They know what it means to wear the shirt. From their club experiences, a lot of them have accomplished a lot of great things.

In a sense, we are all leaders at some capacity. Obviously, some more than others — Zack [Steffen], Matt [Turner], Tyler [Adams], Sean [Johnson]. The older guys kind of coach the younger guys but in a sense, those young guys know. They know. Everyone knows. So I wouldn't say there's a big gap in leadership because everyone comes in and has a lot of responsibility.

SA: How do you feel about the jerseys?

KELLYN ACOSTA: They're not my favorite. Personally, they're fine. They're fine. But I wanted it to be something more extravagant, something more out of the ordinary. Adidas dropped a lot of these new jerseys for the World Cup and they're so cool. Ours felt plain.

It sucks when you see the custom jerseys made online and you're like, 'Dang, that would've been sick if we had that.' But it is what it is.

SA: Did you see a mock-up online that you liked the most?

KELLYN ACOSTA: I saw hoops, black jerseys, quite a few. People are creative. I liked the hoops the most. You saw that and knew it was the States. You look at our jersey now and you're like, 'OK is that France? Who is that?'

You want to know that it's us who's playing without realizing it. It looks like a training top.

We all wanted something super unique, thoughtful and meaningful. Little details go a long way and Nike has done a great job with our jerseys in the past.

SA: How excited are you for this World Cup?

KELLYN ACOSTA: Obviously, I still need to stay healthy and perform and prove myself at this camp. But yeah, it's a childhood dream and it's so close. I want to be on that plane so bad. Not just on the plane but I want to play. I don't want to be a passenger. My sight is on that. All of that in the player pool is ambitious. We want to be on that roster and play. Gregg has a tough problem on his hands but it's a good problem to have.