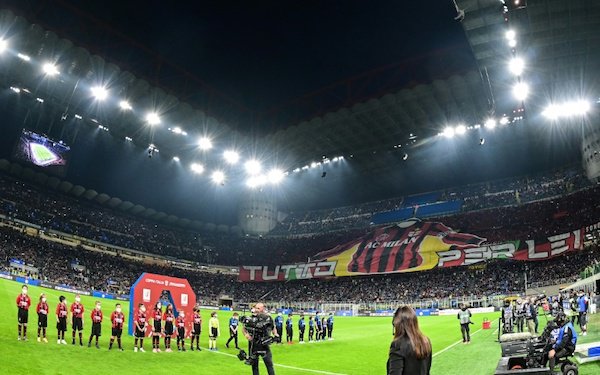 A crucial step towards the demolition of the iconic San Siro began on Wednesday when Milan hosted the first of a series of meetings with the public necessary for the new stadium proposed by the city's two calcio giants.

AC Milan and Inter Milan both insist that they can no longer stay in the current, city-owned San Siro and have drawn up plans for a new 60,000-seat capacity ground flanked by sports and leisure facilities on the same site, which will be completely remodeled.

Should it go ahead, the project is scheduled to be completed in 2030, with $1.24 billion being jointly invested in the development by both clubs, who say they cannot afford to build separate new stadiums and need the increased revenue this project would bring.

Over three years after presenting their initial project, the public will now be able to scrutinize it and have their say at 10 meetings held over a month, after which a report will be presented to the city by the meetings' independent organizers in mid-November.

The city can then decide whether to insist on further changes to a project which has had 50,000 square meters of development cut from it since it was first proposed, or proceed with approval.

The project is divided into two main sections: construction of the new stadium in the area immediately west of the San Siro currently occupied by car parking and a local park, which the clubs want finished by September 2027.

After that is built, the current stadium, set to host the opening ceremony of the 2026 Winter Olympics, will then be demolished before the new facilities -- including shopping, convention and sports centers, are built around a new public park.

It's these facilities and the destruction of a symbolic stadium that have attracted the ire of some Milan residents and a sizeable portion of the city council, which is also angry at the granting of public land to private investors for a fraction of the rent the pair currently pay.

Other criticisms include the significant reduction in the number of seats -- of which over 10,000 could be reserved for hospitality -- way down not just on the San Siro's capacity but also the number of fans currently packing the ground.

Both Inter and Milan have been regularly getting crowds of over 70,000 as a post-pandemic wave of enthusiasm among fans has led to supporters flocking back to stadiums in big numbers across Serie A.

Some pressure groups are pushing for the renovation of the current stadium and dismiss Milan CEO Paolo Scaroni's claims on Tuesday that it would be "impossible and dangerous to get 50,000 fans into a building site," citing the redevelopment of the San Siro ahead of the 1990 World Cup, which added a whole new tier to the stadium.

However, Milan mayor Giuseppe Sala has repeatedly asked critics what local authorities would be able to do with a massive, unused soccer stadium on the outskirts of the city should the project not be approved and the clubs decide to move in order to get the new stadium built.

A source at Inter told AFP in the summer that any more bureaucratic bumps in the road would lead to the project being moved to the site of a former factory in Sesto San Giovanni, a town just outside Milan which is on the city's metro network.

The teams abandoning the area wouldn't just leave the city with a clubless stadium, it would also have an impact on neighborhoods which have for a long time been some of the city's most problematic.

Two stops down the 'lilac' metro line which takes fans to the San Siro is Piazzale Segesta, which flanks a troubled council housing estate -- one of several in the area.

Laura Guardini, a former journalist at the daily Corriere Della Sera and volunteer at the local neighborhood association, says that of the 6,000 homes on the estate almost 1,000 are squatted in, often by people involved in drug dealing and other serious criminal activities.

She says that residents in the legally occupied apartments refuse vacations and sometimes even hospital treatment as once word is out that their apartment is empty, squatters "kick in the doors and take over."

Silvia Cavagnari, who runs a local Italian language school for foreigners, says "the people in this area couldn't care less about the stadium project, they have much bigger problems."

And Laura Mariani, a teacher at the language school, hopes that Milan and Inter manage to get the project approved.

"I hope that the clubs do manage to build it," she says. "Because if they leave, it would be a disaster for this area."