The courage of players who believe killing people is wrong 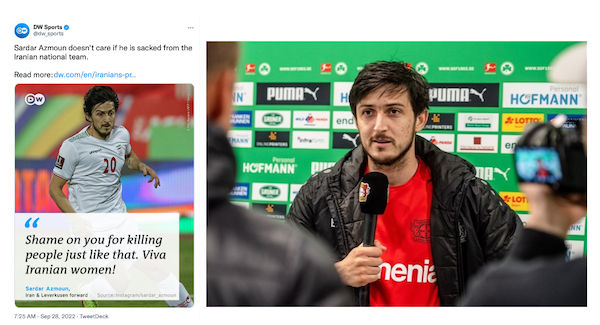 Keep politics out of sport — occasionally someone will leave this comment below my columns. I can understand the desire to switch off reality and concentrate purely and simply on the trajectories of a capricious round ball, but you can no more separate pro sports from politics than you can persuade a snail to discard its shell. Everything we touch is political — from the way we consume energy, to the way we shop at the supermarket, to the way we interact with our fellow human beings. Sports can not possibly exist in an apolitical vacuum, and it actually never has.

It takes immense courage for revered sports figures to push back against the lobby maintaining that sport should not be political. This week, the Iranian national team player Sardar Azmoun, a forward with Germany's Bayer Leverkusen, came on as a sub in a friendly against Senegal in the Austrian capital Vienna and scored his 41st goal for Iran in just 65 games. Iran, like dozens of other countries, is a soccer-centric nation. Those stats alone are enough to ensure Azmoun enjoys a heroic status in the eyes of millions of his compatriots. He doesn't need to speak out about the turbulent political situation back home.

Yet the player was pointedly low-key in celebrating his goal, accepting a few brief hugs of congratulations from his co-players. Earlier in the week, in response to the unrest in several Iranian cities after a young Kurdish woman, Mahsa Amini, died after being taken into custody by the Morality Police for reportedly not wearing her headscarf properly, Azmoun had written on his instagram account: "Shame on you all, when people are murdered with such flippancy. Long live Iranian women. The rules of the national team state that we are not allowed to speak out, but I can not take the silence any longer. The ultimate punishment will be to get thrown off the team, but that would be a small sacrifice compared to every individual strand of hair of an Iranian woman."

Azmoun returned to Leverkusen after the Senegal game and has since deleted the posts. He says that he came under no external pressure to do so, but wanted to apologize for the social media knock-on effects - insults and threats made to his Iranian teammates. This only underlines his courage in speaking out in the first place. Not only do you risk the repercussions of an oppressive, authoritarian government not averse to murdering dissidents, but you have to explain yourself to your professional playing colleagues, most of whom would presumably prefer to focus on the upcoming World Cup.

Countless player interviews over the past few months have talked about how making the World Cup roster will be the pinnacle of their careers. That overtly obvious point also highlights why Azmoun is an exceptional individual. Just as he's about to represent his soccer-crazed country at the biggest sports tournament on earth, he's placed his international career at risk on a matter of principle: killing people is wrong.

Everyone's aware by now - even those who insist we should keep politics out of sport — that thousands of poorly paid and effectively enslaved foreign workers from impoverished countries have died while building the infrastructure for the Qatar World Cup that starts in seven weeks time. Many died while working long hours in searing heat, but their bodies were sent home without autopsies to determine the actual cause of death. The number of casualties and the conditions they failed to endure will cast a long metaphorical shadow over the entire tournament. 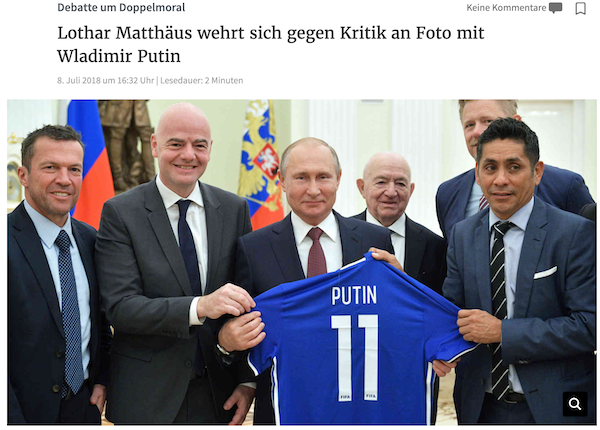 But not to worry! Official World Cup ambassador Lothar Matthäus (150 caps for Germany) told the Süddeutsche Zeitung last week that the press digs up "negative things" before every tournament. Once the ball's in motion, though, we all grab a beer and settle down, and even those pesky carping journalists are only interested in what's happening out on the field.

Then there's MLS franchise owner David Beckham (115 caps for England), who earlier this month reaped extremely positive press after queuing for 13 hours to look at the coffin of a dead monarch. The former gay icon is also reaping an estimated $180 million for a 10-year contract shilling for a Qatari regime that criminalizes homosexuality, with a maximum penalty of death by stoning. No doubt, though, no one will be throwing stones once the ball starts rolling and we all settle down with a six-pack to watch the good ole soccer, eh? Here's to the King!

No one's expecting active players at this stage to take the route that Sardar Azmoun has had the conviction and guts to forge. Besides, in the west we now need more oil and gas from the Middle East thanks to the current energy crisis, so it's judicious to temper any talk about human rights. Remind me why there's an energy crisis again? Oh yes, Russia invaded the Ukraine, parts of which it had annexed four years prior to the last World Cup in 2018, which was hosted by ... Russia.

There's a picture of Vladimir Putin with FIFA President Gianni Infantino, smiling as they hold a replica shirt with Putin's name on it. Also in the picture is Lothar Matthäus. No doubt he's thinking, "Critics are going on about the illegal annexation of the Crimea. But don't worry, once the games kick off, it'll all be fine." Yet no matter how often famous names like Matthäus strive to keep politics out of sport, the two will just not be prised apart. And killing people will always be wrong.

Ian Plenderleith’s new book "Reffing Hell: Stuck in the Middle of a Game Gone Wrong" is available on Amazon Kindle in the USA, or as a good old-fashioned print book directly from its UK publisher, Halcyon.

world cup
8 comments about "The courage of players who believe killing people is wrong".
Read more comments >
Next story loading