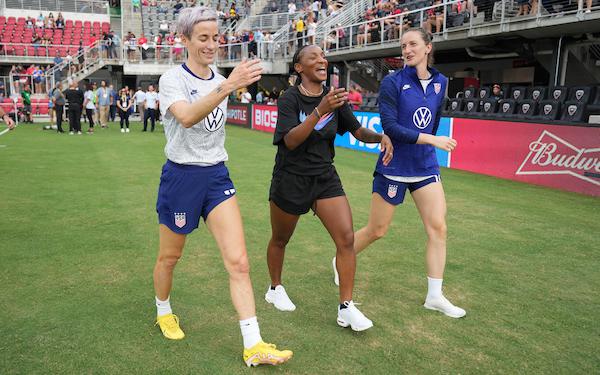 Vlatko Andonovski has named a 24-player squad for the USA's two friendly matches in October.

The USA will face England on Oct. 7 at sold-out Wembley Stadium in London and play Spain four days later at El Sadar Stadium in Pamplona.

His squad includes Crystal Dunn, who started for the USA when it won the 2019 World Cup in France and gave birth to a son in mid-May. She trained with the USA during its September camp but did not dress for the friendly games against Nigeria,

Andonovski also called up 17-year-old Alyssa Thompson, who recently played for the USA at the U-20 Women's World Cup in Costa Rica, where it was knocked out in the first round. She plays for Total Futbol Academy's boys team in MLS Next and is the youngest player to be called up for a full national team camp since 16-year-old Sophia Smith in April 2017.

Of Andonovski's initial call-ups for the Concacaf W Championship, which the USA won to qualify for next year's World Cup in Australia and New Zealand and the 2024 Olympic women's soccer competition, Kelley O'Hara, Emily Sonnett and Alex Morgan are missing with injuries -- Morgan's knee injury isn't believed to be severe -- and Midge Purce was not called up because of what Andonovski described as her "dip in her form" with last-place NWSL club Gotham FC.

Megan Rapinoe (who started) and Becky Sauerbrunn (a late sub) are the only players who played for the USA when it beat Japan, 2-1, to win the gold medal at the 2012 London Olympics before 80,203 fans and will be on the trip to Europe next week after the NWSL regular season ends.

"They know what it takes to win big games and play environments like this and be successful," said Andonovski.

He said the goal of the trip is to get younger players a chance to experience playing in front of a large crowd on the road.

"These are big tests for our team in front of crowds cheering against us and after long travel, but our players absolutely love games like these,” added Andonovski. “The group we are bringing to Europe includes players who have a lot of experience against top European teams and some that don’t, so these games are even more critical for our growth as our team. Our whole squad needs to get a clear picture of what these games are like as we continue to prepare for the World Cup.”

Andonovski was at the Euro 2022 final played this summer at Wembley, where England beat Germany, 2-1, with 87,192 in attendance.