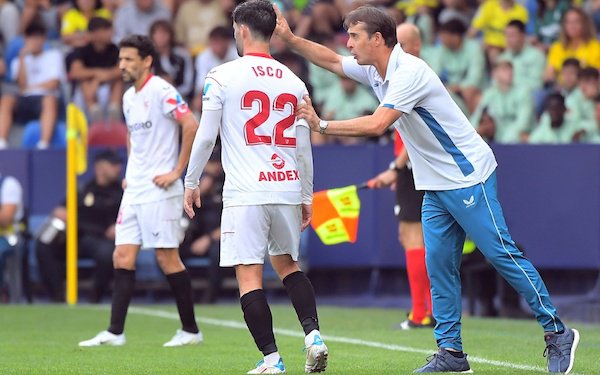 Atletico Madrid and Sevilla have cut ground on Spain's traditional giants Real Madrid and Barcelona in recent years, but the tide is turning again.

In 2014 and 2021, Atletico lifted the title, while Sevilla have been in contention, too, finishing in the top four in each of the last three campaigns.

However, Diego Simeone's Rojiblancos visit the Ramon Sanchez-Pizjuan on Saturday looking for a vital win to try and keep a grasp on the league frontrunners' coattails, while Julen Lopetegui's team us scrambling for points to move away from the relegation zone. Loftier ambitions will have to wait.

The Andalusians have endured a torrid start to the campaign, with just one win from six games leaving them a point clear of the drop zone and piling pressure on Lopetegui.

On the sidelines of his team's 1-1 draw with Villarreal before the international break, the former Spain and Real Madrid coach paced anxiously, tersely barking instructions as his team almost caved in the final stages.

To make matters worse, Lopetegui will be sweating on the fitness of playmaker Isco and midfield battler Joan Jordan, while Tecatito Corona and Marcao are poised to miss the game.

"There were many changes (in the summer), players who came in late, without a pre-season, these are things that impact performance a lot," Isco told Muchodeporte. "(Lopetegui) is a coach who has always believed in me, I thank him for it. He's a coach who I believe in personally and the dressing room is with him. We are together, not just in the wins but also in the defeats, that's when you see a true team."

Atletico, seventh, arrive with pressure to make amends too, following the 2-1 home defeat by rival Real Madrid in the derby. That match was stained by racism from some Atletico supporters aimed at Vinicius Junior, leaving the club with work to do both on and off the pitch.

Atletico was also beaten in the Champions League by Bayer Leverkusen and aims to avoid a third consecutive defeat.

The game seems destined to be tight, tense, and potentially explosive as only victory will suffice for either team. Should Atletico fail to win, it could find itself potentially 11 points behind league leader Real Madrid.

"We'll keep working and looking at the Sevilla game, knowing that we have to improve and we will do that," pledged Simeone after the derby defeat.

With heavyweight Real and Barcelona hitting form, some in Spain wonder whether this season will be a throwback to the days of the duo racing to reach 100 points, leaving the others in the dust.

Atletico will be aiming to prove otherwise, while a victory for Sevilla could be the catalyst their season needs.

Benzema has trained this week after injury and is expected to return for Real Madrid against Osasuna on Sunday.

The French forward picked up his trophy for finishing as last season's top scorer in La Liga on Wednesday, but this year will be harder.  Barcelona's Robert Lewandowski leads the scoring charts on eight goals, and for now Benzema only has three.

"I'm going to try and do more," said Benzema at the Marca awards ceremony. "That includes winning La Liga, scoring a lot of goals and most importantly, enjoying myself on the pitch."