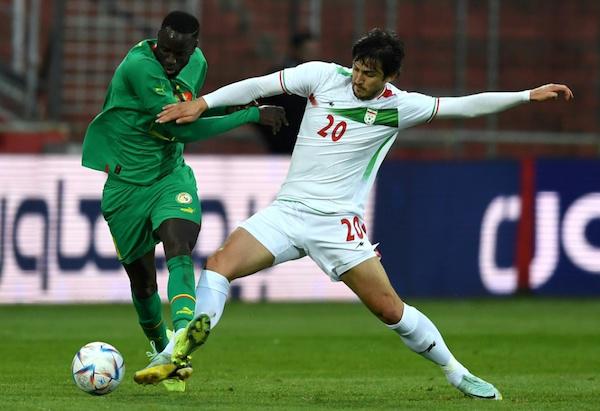 Some Iranian fans are hoping their team will be “humiliated” by the USA and England at the World Cup in Qatar after players failed to condemn a violent crackdown that has left more than 70 dead.

Thousands have taken to social media following protests sparked by the death of 22-year-old Mahsa Amini, killed by the notorious morality police following her arrest for not wearing the hijab properly.

On Telegram, one fan, called Sacra, said: “First of all, they will return with three humiliating defeats. Secondly, I couldn’t give a damn if they advanced to the second round. Nobody would be on the streets celebrating for them.”

Another, just called D, added: “Let’s hope for utter humiliation against USA and England," while Omiild.soool said he was hoping for an 8-0 defeat against the USA.

@alissonburgerr tweeted: “Personally, for every loss of the national team in the Qatar World Cup, I will run onto the street and distribute sweets if these players don’t care about the people. Honour is to be on the side of your people with pride. You wretched cowardly mercenaries have dishonoured yourself, worth less than a dog.”

Group B – which also includes Wales – will see Iran will play England on Nov. 21 and USA on Nov. 29.

And with seven weeks to go until the tournament kicks off, the team faces the prospect of noisy protests at the games in Qatar.

Such is the level of fury that fans were not allowed in to watch a 1-1 draw with Senegal in Austria on Tuesday night for fear they would disrupt the match.

One player, the striker Mehdi Taremi, has been singled out for abuse on the website of his club, FC Porto.

Only Sardar Azmoun (No. 20 in photo), another forward, from Bayer Leverkusen, who scored in the Senegal game, has spoken out saying in an Instagram post: “I risk being eliminated from the national team, that is worth sacrificing for one strand of Iranian women’s hair. Shame on you kill people so easily. Long live Iranian women”.

Another player, Zobeir Niknafs, put a video on social media showing him shaving his head in solidarity with the protests.

It led to the Iranian actor Kambiz Dirbaz calling on Sardar’s teammates to follow his lead, posting in Instagram: “My dear brothers on the national team. This is a historic opportunity. Become one and keep the flag of Sardar high.

“What could happen? You will be dropped from the national team? Instead you will forever be in the hearts of millions of your co-patriots.

“Instead of you, let them take the Armed forces team to the World Cup!! Let’s see how many goals they concede against the USA and England and return.”

But there was no mass walkout, and following last Friday’s victory over Uruguay in its first pre-World Cup friendly, the players held a meeting at the end of which Sardar deleted his post and apologized to his teammates for interrupting the training camp. (Sardar has since posted other images on his Instagram account.)

His teammates tried to calm the fans down by putting out carefully-worded statements saying they wanted to “bring joy and happiness to the nation,” but their failure to condemn the clampdown has only fueled more anger.

Iranian players wore jackets to cover up the country's badge on their uniforms when they lined up before Tuesday's 1-1 friendly match with Senegal in Modling, Austria. It was viewed as a sign of support of the mass demonstrations but the players have been silent about their intentions. 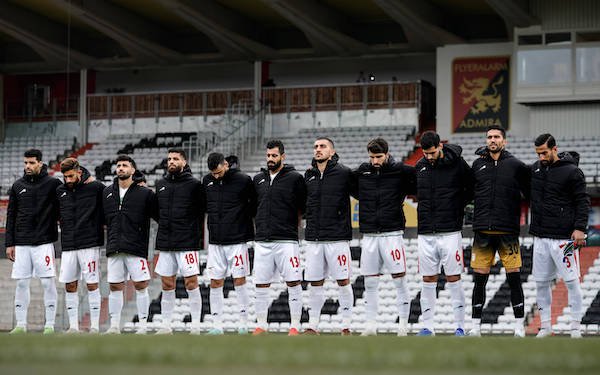 If the response of today’s players has been noted, the heroes of the past have not shied away with 1998 World Cup star Ali Daei being an outspoken critic.

He told the regime to “solve the problems of the Iranian people rather than using repression, violence and arrests."

On Thursday, Hussein Mahini, who played on the 2014 Iranian World Cup team, was arrested as part of a clampdown on celebrities supporting protests against the regime in Iran following the death in custody of a 22 year-old woman.

The 36-year-old defender was held after a court order was issued against him for posts on social media which were “an attempt to promote disorder and chaos in the country."

It is far cry from the last time Iran faced the USA in a World Cup – the famous 2-1 victory at France '98 that had the whole nation rejoicing.

Dubbed the most politically charged match in World Cup history, it led to thousands taking to the streets in Tehran to celebrate victory over the “Great Satan."

But if history repeats itself and Iran manages to pull off another victory over USA in Qatar, the scenes of jubilation may not be quite the same: