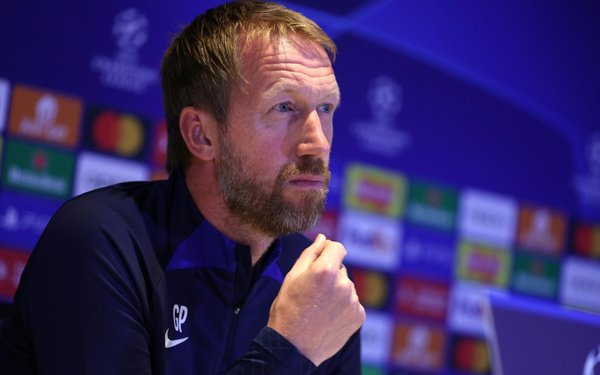 Graham Potter says he has no qualms about working in a rapidly changing environment at Chelsea as the new owners continue their sweeping overhaul of the Premier League giants.

The Englishman will oversee his first Premier League game since taking charge of the Blues at Crystal Palace on Saturday.

Todd Boehly's consortium completed a takeover of the Stamford Bridge club in May and have since embarked on a radical program of change, on and off the field. They splashed out around £250 million ($279 million) in the summer transfer window only to sack 2001 Champions League-winning coach Thomas Tuchel earlier this month.

But Potter, whose first game in charge was an uninspiring 1-1 draw with Red Bull Salzburg in the Champions League, appears relaxed about the situation despite the turmoil.

"I think the first thing to say is change is good and it's bad and it's challenging -- it's all those things," the former Brighton boss said at his pre-match press conference on Friday. "It's how you deal with it, it's how you work with it. So I think it's well documented what's happened, in terms of ownership, new coach, different people. That's part of life sometimes, it's just how we manage it."

Chelsea is seventh in the Premier League table after a disappointing start to the season.

The owners are understood not to consider a top-four league finish this season as crucial to the new manager's future at the London club.

Potter said he realized the importance of qualifying for the Champions League for a club of Chelsea's stature.

But he added: "The past or resources or history doesn't guarantee you anything in this league. You can see already, there's lots of clubs that have spent a lot of money and haven't achieved things that maybe they wanted to. So it's about getting everything lined up, everyone working together and strategy clear."