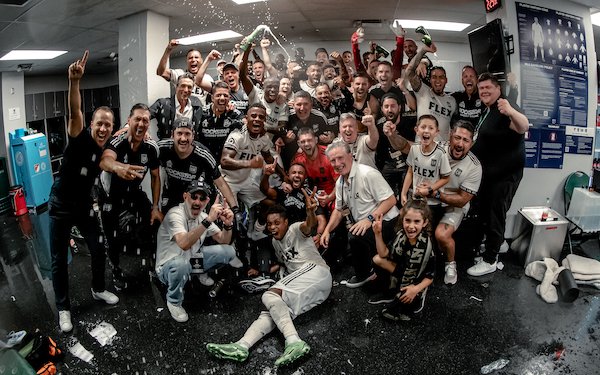 The first five teams were all original MLS teams from the league's 1996 launch.

The sixth, LAFC, has won the Supporters' Shield twice in its first five seasons.

What is remarkable about the second Supporters Shield in the last four years is that LAFC was largely overhauled.

The French-born Gabonese international winger scored the winning goal in the fifth minute of stoppage time to give LAFC a 2-1 victory over the Portland Timbers on Sunday.

Bouanga scored his first goal in six games for LAFC since arriving from French club St. Etienne on a Designated Player contract in August.

He is one of five starters against the Timbers who weren't with LAFC in 2021. Only two starters -- Carlos Vela and Diego Segura -- were regulars in 2019 when LAFC won its first Supporters' Shield with a then-record 72 points.

LAFC was on pace to break the MLS season record for points New England set last season with 73 when it hit a rough patch in late August, losing four of five games.

With the win at Portland, LAFC opened up a three-point lead with one game to play on the Philadelphia Union, which fell at Charlotte FC, 4-0, on Saturday. (LAFC has an insurmountable edge in the first tiebreaker -- total wins.)

“We envisioned making the playoffs this year," LAFC coach Steve Cherundolo, "but certainly this was beyond our expectations."