Sally Yates: 'The NWSL has the authority to deal with owners'

In the hours after Monday's publication of the Yates Report into the NWSL, the reaction of those in the soccer community was rather muted, one of shock, as they tried to absorb the details of abuse by the league's coaches and inaction of the sport's leaders. 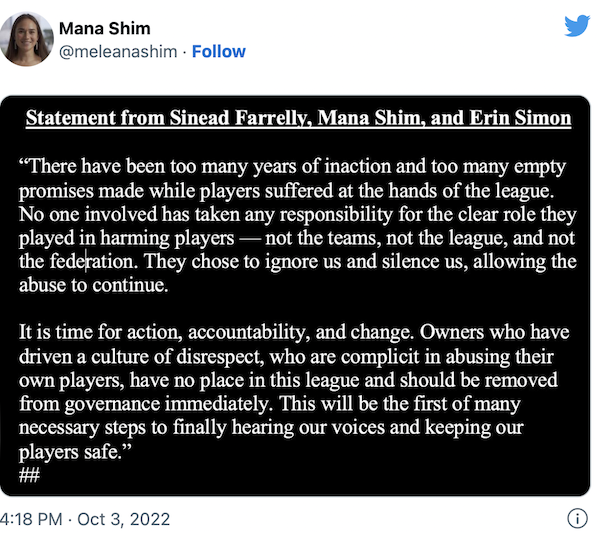 When the report was published on Monday morning, members of the two-time reigning world champion U.S. national team were en route to London to prepare for Friday's friendly against England at sold-out Wembley Stadium and a match four days later at Spain (minus 15 players who refuse to play until their coach, Jorge Vilda, leaves).

One person who had a chance to review the report — "I am still dealing with it and trying to absorb all of it" — was U.S. Soccer president Cindy Parlow Cone, who described the details in the 319 pages of findings, recommendations, footnotes and documents as "infuriating" and "shocking."

"As new things come up," she said in a media call on Monday afternoon, "I just found it really maddening that players had to go through this."

Cone is a former NWSL coach — "Many of the players in this report I know, many of them I’ve coached," she said — and she appears herself in the report as a victim.

On the issue of the workplace culture at the Portland Thorns, which she coached in the NWSL's first season and led to the 2013 league championship,  she told Yates investigators that when she was the coach in 2013, Portland Thorns and Timbers president of business Mike Golub once asked her, "What’s on your bucket list besides sleeping with me?"

(Cone told Golub never to speak to her like that again, and she told investigators that he did not.)

Sally Yates separately spoke with the media, using it as an opportunity to emphasize key points of the report, which said the verbal and emotional abuse players described in the NWSL wasn't merely “tough” coaching.

“We’re talking about sustained degrading and manipulative conduct that was all about power," she said, "not about enhancing a player’s performance."

Even "more disturbing," the report found, was a pattern of sexually charged comments, unwanted sexual advances and sexual touching, and coercive sexual intercourse.

The abuse committed by NWSL coaches — in particular, Paul Riley and Rory Dames — was previously reported by reporters from The Athletic and Washington Post — without their work, such an investigation would have never likely taken place — but Yates' report reveals how these abusers remained in the league even after players came forward and those in power within the NWSL and U.S. Soccer failed to act.

“They not only failed to respond appropriately to evidence of abuse," Yates said, "they had also failed to institute the most basic measures to prevent and address these issues to begin with, even as some of them privately acknowledged the need for these things.”

The report concentrates on the abuse by Riley, Dames and former Sky Blue FC and Racing Louisville head coach Christy Holly, but other coaches have left the NWSL or remain suspended or on administrative leave.

Yates said that was "a huge undertaking" just to investigate the cases of Riley, Dames and Holly and she was "mindful of the fact that it's important that this investigation not go on forever."

The NWSL and NWSL Players Association are conducting their own investigation into what happened within the NWSL, and Yates said it will be the league's decision about what to do with the results of the U.S. Soccer and NWSL/NWSLPA findings and recommendations.

Yates Report recommendations include determining "whether disciplinary action is appropriate for any of these owners or team executives."